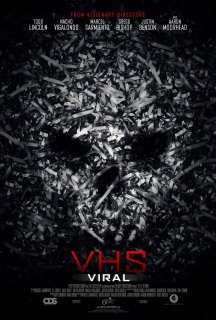 This will be the third trip into the V/H/S world. Both sequels have had their up and down moments as anthology films invariably do.

V/H/S: Viral‘s segments include –
Teen skaters who unwillingly become targets of a Mexican death cult ritual
A sinister and shadowy organization that is tracking a serial killer.
A story of a deranged illusionist who obtains a magical object of great power
A homemade machine that opens a door to a parallel world
The segments are tied together by the story of a group of fame-obsessed teens following a violent car chase in LA that unwittingly become stars of the next internet sensation.

Check the trailer below!