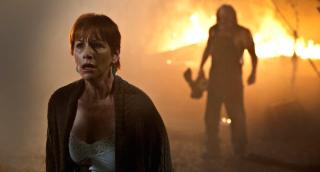 Adam Green said today: “I am thrilled to see the Horror Channel broadcasting the UK television premiere of HATCHET 3 on December 20th.  For those of us behind the gory scenes, this trilogy was a decade long journey that never would have happened without the extremely passionate fans that cheered us on while we slashed, laughed, and blew up everything in our path”

He went on to praise the UK horror fans in particular: “”I’ve always said that HATCHET’s UK FrightFest premiere was really Victor Crowley’s birth into the genre stratosphere as that was the first time that the film specifically played for the very audience that we made it for. So it’s great to see Victor back on UK TV screens, courtesy of one of FrightFest’s biggest supporters”.

Made in 2013, Green’s script picks up immediately after the end of the last film and Marybeth (Danielle Harris) uncovers the true secret to stopping the voodoo curse that has left the ghost of deformed maniac Victor Crowley (Kane Hodder) haunting and stalking the New Orleans bayou for decades. Cue an entire police department face off with the infamous slaughter-machine in this action-packed, explosive sequel full of splatter stunts – all adhering to Green’s strict no-CGI rule. The first of the series to be filmed almost entirely on location in New Orleans, this marks the directing debut of cameraman B J McDonnell (The Walking Dead). This masterful montage of mayhem also stars Zach Galligan, Caroline Williams and Derek Mears.

Last word with Crowley’s creator: “Are the Hatchet films sick?  Perhaps.  But they certainly are fun and the long, long road in creating them was worth every difficult step.   I hope the UK horror fans enjoy the television premiere of HATCHET 3.”

Canadian filmmaker David Cronenberg, who has long been fascinated by the ways new technology shapes and manipulates us, is in familiar territory with eXistenZ, a futuristic thriller which combines elements of science fiction, horror and action-adventure. eXistenZ is a new organic game system that, when downloaded into humans, accesses their central nervous system, transporting them on a wild ride in and out of reality.  A leader is the field is game designer Allegra Geller (Jennifer Jason Leigh) but when she narrowly escapes an assassination attempt during a demonstration of a new game, eXistenZ, she finds herself on the run with a marketing trainee (Jude Law). In a race against time and many unseen enemies, they must try to prevent the pod, which contains the only copy of the eXistenZ game, from being stolen. But what is the game and what is reality?

Newlyweds Holly (Graci Carli) and Trevor Davidson (Rod Luzzi) are on a road trip to celebrate their honeymoon in Miami when their new life together takes a surreal turn. A whimsical pit stop in a tourist trap goes horribly wrong and they find themselves forced to face an ominous new presence in their lives and an ambiguous threat. But is that threat coming from Trevor’s family, Holly’s dark past, or something far more sinister and otherworldly, such as the ancient curse of the Copiii Pierdere? Directed by L.Gustavo Cooper.

Russell (Lance Henriksen) and his son October (Sean Elliot) venture into the woods to salvage their relationship, but face a gruelling struggle against a powerful force of evil while grappling with their tragic past. Subsequently stranded in the forest after an accident renders Russell immobile, October vows not to give up on him as a terrifying onslaught of phantoms and monsters emerge from the trees. Are these horrors mere figments of his imagination, or the baleful harbingers of an encroaching darkness that’s about to make itself known? Directed by Scooter Downer, this was originally released as It’s in the Blood.

It’s graduation weekend, and Sandy Channing (Carly Schroeder), the popular class president of her small-town high school, should be enjoying the time of her life. But when her friends start disappearing, Sandy discovers they have unwittingly awakened the vengeful spirit of a girl they wronged long ago. Fighting for her sanity, Sandy must unlock a dark secret from her own past before it’s too late. Directed by Tyler Oliver 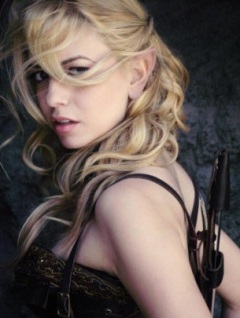 John Norton, a battle-weary ex-Special Forces Operative (Rusty Joiner) buys a ranch in remote American West to flee from the world, But far from finding the peace he craves, he encounters a strange series of trespassers, including a beautiful elf princess (Masiela Lusha)  and Orcs. When the Orcs invade his property, John must give up his isolation to become a hero, before the Orcs unleash their dragon god onto our world. Directed by Kohl Glass.