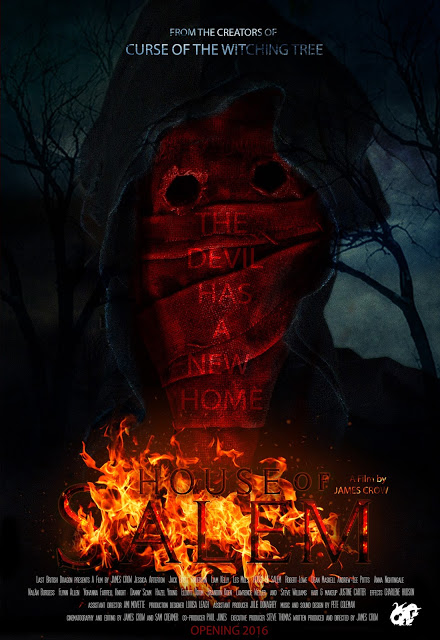 House of Salem…
A new film from James Crow (The Witching Tree – our review here), House of Salem has a teaser poster and synopsis! Check it out.
From the Press Release

First teaser poster and synopsis revealed for new horror film HOUSE OF SALEM From the creators of “Curse of the Witching Tree” comes a striking bold new twist on the ghost and sacrifice genre
Independent film company Last British Dragon has just wrapped filming its second feature length horror film after “Curse of the Witching Tree”. Written, Produced and Directed once again by James Crow, the film promises to build upon its success in the USA and UK with another film entering the realms of demonic forces, gothic imagery and eerie undead sprits.

“ A group of kidnappers become a child’s unlikely protectors, after finding out they have
unwittingly been set up to take part in a deadly game of human sacrifice. As they start to
uncover the truth of the safe house they find themselves trapped, they must battle demonic
forces in the walls and uncover the terrifying truth of over a hundred years of murder in the
name of the Devil.

“Andrew-Lee Potts from ITV’S Primeval and Syfy’s Alice returns to the horror genre for the first time since Red Mist in what he calls a “very Dark and Intense Film”. The film stars Jack Brett Anderson from the forthcoming season of the BBC’s Wolfblood series who said “From the beginning to the end, the script had me captivated, and even at it’s end I was left still wanting more! So to
be apart of this story was an exciting challenge to bring what the script deserved!
Alongside Andrew-Lee Potts is British TV regular Anna Nightingale in a new dark chilling role like
nothing she has played before. And fellow BBC and ITV star Robert Lowe. Best known for starring
alongside David Tenant in Secret Smile and playing characters Jack Maitland in Primeval and Lee
Dewyer in The Bill.

Created in co-operation with the prestigious Pauline Quirke Academy, the film features a debut
and wealth of new young British talent, including the screen debut of teen actress, Jessica Arterton,
alongside a return from Curse of the Witching Tree cast… Dean Maskell, Sarah Rose Denton and
Lawrence Weller.

“The film is a lot larger in scale. It’s far more violent, and I also think a lot more disturbing. But I
think it stays true to the traditions of psychological horror at the same time. I’m really excited for
everyone to see it and show what we have achieved with a much higher budget since the last film. Hopefully people will find it really exciting!” – James Crow

The film is now in post-production with Pete Coleman returning once again to create a new musical score after rave reviews of his soundtrack on Curse of the Witching Tree. Details are still largely under wraps, but an international release is due next year with more details to follow soon.

A twitter has been set up for the film @HouseofSalemUK along with the launch of Last British Dragons new website http://www.LastBritishDragon.Com where you can find updates on House of Salem and all future productions from James Crow and his team.