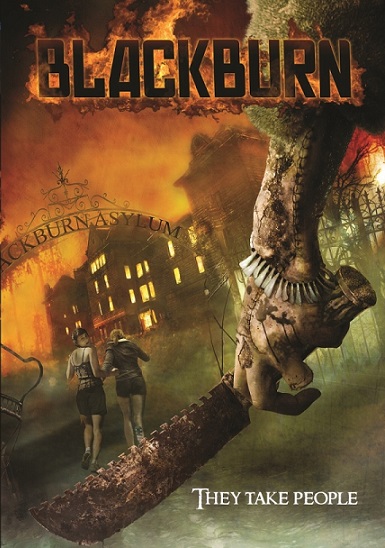 Check out the trailer and details on Blackburn’s DVD release.

Blackburn is set to release on DVD this August. Tombstone Entertainment will handle the release. A 3Brane Entertainment production, Blackburn involves a group of friends, trapped in an old mining town. From a script by Nastasha Baron and directed by Lauro Chartrand, this title stars: Lochlyn Munro (Poker Night), Jen and Sylvia Soska (“Hellevator”). Emilie Ullerup (A Little Bit Zombie), Sarah Lind (Wolf Cop) and Calum Worthy also star. All of these filmmakers have developed this hard R (restricted) horror feature, which now invites you to take a look at the official DVD artwork.
In the story, a forest fire forces five friends to take a detour. Lost and afraid, they seek shelter in an old mining shaft. But, someone or something lives in these dark depths. Now, this fivesome will have to fight back, against mutated miners and demented psychopaths, if they hope to continue living.
The official DVD artwork reveals more of the film’s story. The Blackburn Asylum, long since closed, still haunts the local woods. Its residents, forced out by its closure, roam inside this broken down building. Promising to “take people” many of the deformed monsters can be seen, in this official artwork. And, more on Blackburn will be revealed this Summer as the film nears its August 2nd, 2016 release date.

Synopsis
A forest fire and rock-slide trap five bickering college friends in a small Alaskan ghost town with a horrifying history. When they seek refuge inside the torched ruins of Blackburn Asylum, they must fight to survive as the angry inhabitants slaughter the friends one-by-one.

A fan page for the film: https://www.facebook.com/blackburnhorror/
On Twitter: https://twitter.com/BlackburnAsylum