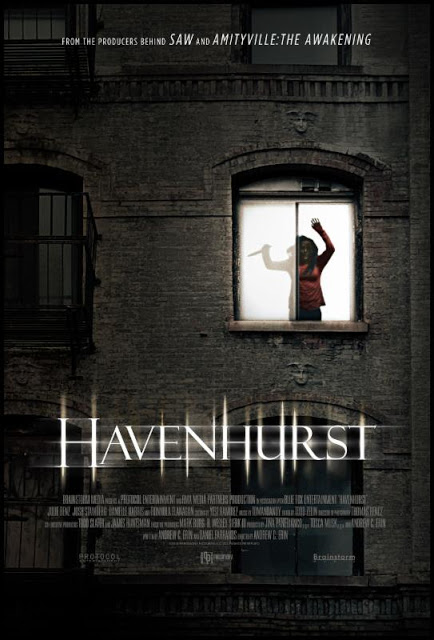 Check out the details and the trailer for Havenhurst. The film releases Feb 10 2017 (USA).

Jackie (Benz), a troubled young woman struggling with addiction, is released from rehab and given a second chance with a new job and a furnished apartment at Havenhurst. Guilt-ridden over the loss of her 8-year-old daughter, Jackie is quickly drawn into the mysteries of Havenhurst, in particular the disappearance of apartment 1006’s previous lost soul, a young woman (Harris) she befriended in rehab who vanished without a trace.

Aided by a hardened New York police detective (Stamberg) and a lonely foster child (Shouse) who lives under the sadistic shadow of her caretakers, Jackie must not only battle her inner demons… but the very real ones that live within the walls of Havenhurst.

Welcome to Havenhurst, a gothic apartment complex in the heart of New York City. A beautifully maintained, turn-of-the-century building that houses over 3,000 residents and countless dark secrets. The rent is what you can afford and the rules are simple: live a decent life and you can stay forever. Break the rules and there are consequences

If you are in the area: