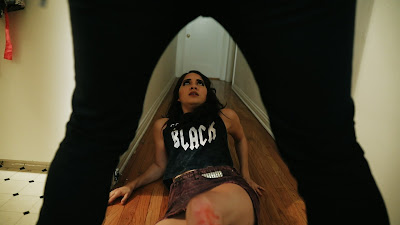 A new anthology horror series is coming to a laptop new you! Fractal Vision brings together a diverse group of filmmakers, including Matthew T. Price, writer/director of Other Halves, Nicki Hunter, Carson Nicely (Conan), Miranda Parham (We need to Talk) and more.

Fractal Vision is inspired by everything from the Twilight Zone to 80s slashers to modern series like Black Mirror. It explores the weird, the fantastical, and the horrifying, all in just five minute episodes.

The first two episodes are already streaming on YouTube. DupliKate stars Nicki Hunter as a woman who’s found the perfect home; now all she has to do is eliminate the woman who lives there. A Final Girl’s Best Friend is an homage to slasher films of the 1980s, but with a twist.

While the Fractal Vision team has shot several episodes, their goal is to film 24 episodes. In order to accomplish that, they’re crowdfunding a portion of their budget through Hatchfund. Perks for backers include unrated versions of the episodes, with more gore, nudity, and explicit language than YouTube allows. Other perks include signed DVDs, set visits, and participation in the casting and production of the series.

Check out their pitch video: