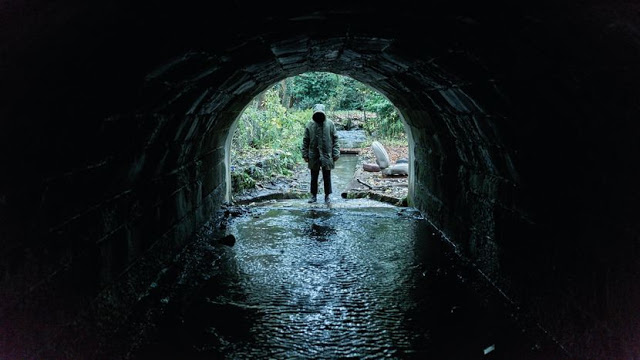 It’s a while since we’ve seen a cinematic anthology of horror tales, but Ghost Stories revives that tradition with a trio of supernatural stories in the style of English portmanteau movies of the 1960s and the Ealing classic Dead of Night.

The film’s writer-directors Andy Nyman and Jeremy Dyson have adapted Ghost Stories from their successful stage show. (Nyman is an actor, writer and magician who has devised productions for Derren Brown; Jeremy Dyson is actor, writer and co-creator of The League of Gentlemen). Their film is a tribute to old-school horror tropes.

In the encompassing story, Nyman plays Professor Philip Goodman, an atheist, rationalist lecturer and TV celebrity who exposes paranormal hoaxes and frauds. Goodman’s mistrust of the ‘spiritual’ derives from an unhappy childhood with a fanatically religious father, uncompromising and unforgiving of Philip and his older sister.

Philip himself grew up hero-worshipping a 1970s TV personality who was likewise a debunker of the ‘paranormal’, but who disappeared at the height of his fame and was assumed to be dead.

Philip is astonished when, out of the blue, he receives a communication from his supposedly dead hero, who informs him that his disappearance was simply the result of a personal crisis. They arrange a meeting in the dilapidated caravan in which the man now lives.

Rather than congratulating Philip on continuing his work, he insists that he reopen the file on three of his cases that would not submit to rational explanation. Philip grudgingly agrees to investigate and uncover the prosaic truth.

In the first case, Tony Matthews (Paul Whitehouse), a sour night-watchman with a tragic family history, is plagued by terrifying visions while guarding a semi-derelict building once used as an asylum. Philip arranges to interview him in a gloomy and deserted pub. Tony is prickly and defensive and often on the verge of hostility towards this academic and TV celebrity who wants to dredge up distressing aspects of the past.

In the second story, Simon Rifkind (Alex Lawther) is a jittery young student with a dysfunctional home-life. Whilst illegally driving home one night on a foggy, woodland road, he is involved in a nightmarish hit-and-run accident.

Since then he seems to be living in self-inflicted imprisonment in a state of near-nervous breakdown, in a house full of unsettling phenomena. When asked in, Philip gets a glimpse of Simon’s parents, eerily standing stiffly inert at the kitchen sink, with the tap pointlessly running. When upstairs in the boy’s bedroom, someone raps loudly on the door. Yet the boy maintains they are alone.

The third story concerns a wealthy ex-banker called Mike Priddle (Martin Freeman), whose ultra-modern house on his country estate is bedevilled by a poltergeist, just as his heavily pregnant wife enters the final stage of a traumatic labour and gives birth.

Freeman’s Mike is a stereotypical city-boy snob, whose casual anti-Semitism to Philip regarding his Jewish family leads to a flashback to Philip’s schooldays, to an event which he has tried to forget.

Philip himself begins to fear that all these ‘ghost’ stories have a collective significance pertaining to him personally. Writers Nyman and Dyson imbue the whole with cumulative clues that eventually reveal the protagonists to be unreliable narrators. The final explanatory mind-bending rip in reality is fairly absurd – a familiar narrative trick – but it still manages to be unsettling.

Mostly shot in Yorkshire, Ghost Stories portrays a kind of modern Gothic – with grimy, nicotine-stained pubs and dull, deserted winter caravan parks. Everything seems crepuscular, vacant and slightly off-kilter. Nyman and Dyson adapted Ghost Stories for the screen and apparently added subplots and layers, but they made no effort to be innovative (there is not a single female speaking role in the film – the female is almost entirely a source of terror).

Old-school frights and jump scares may have been more startling as cleverly-managed stage illusions in a live-theatre setting, but on the big screen they tend to lose much of their shock value.