We rejoin Ash and Pablo hiding from the cops inside the school as the dead kids are wheeled out. Ash dealing with Brandy’s death, now finds out Kelly isn’t Kelly. Pablo knows that Kelly is caught in the rift and that sparks Ash’s memory in a delicious call back to Evil Dead 2, Ash wants to go into the rift to find Kelly and Brandy but first Ash needs to steal Brandy’s body from the Coroner. Meanwhile in the Dead Lands, Brandy and what looks like just about everyone who has been killed recently is running for the shape that is hunting them as Brandy watches another dance massacre victim get taken by the shape, Dalton pops up to tell her that if the shape finds you, it will kill you.

Back at the school, Ash and Pablo quite easily still the coroner’s van, only problem is there is more than one body in the van and we all know what dead bodies mean – Deadites. Inside the rift Dalton takes Brandy to an area that the shape doesn’t normally come around, they meet Kelly and for the time being, they hide. Ash and Pablo take Brandy’s body down to the cellar of Ash’s store and Ash tells Pablo to do his magic thing. Pablo protests and then stumbles across a terrible plan… to enter the Dead Lands, the evil must kill you… Pablo suggests using the Kandarian dagger… 1…2…3… and then the deed is done. Pablo stabs Ash and Ash wakes up in the Dead Lands. 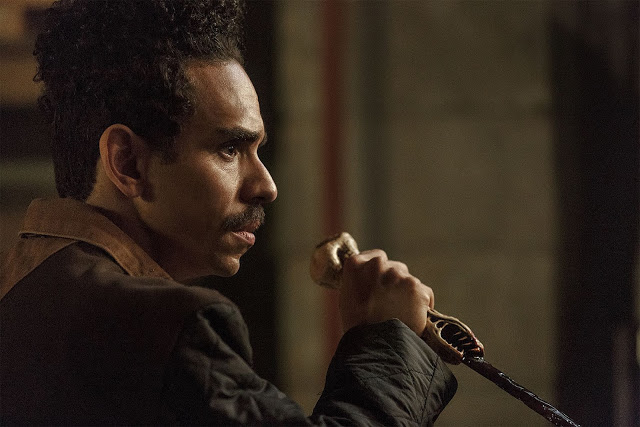 Pablo notices Brandy’s body is gone and that can only mean one thing, except that it’s not Brandy but it is the one of the other bodies from the van – now in demon form that attacks Pablo. Pablo finishes of the demon threat with a creative use of a paint shaker.

Our group in the Dead Lands then tries to find the cellar so they can get back through the rift. The shape appears in front of them blocking the way, Dalton decides to sacrifice himself as our group climbs into the Delta (Ash – ‘Aw the evil killed a classic’) and as Dalton gets dragged to hell, so to does the Delta – only to emerge and bust through the road and Ash, Kelly and Brandy make to the cellar and Pablo creates the rift portal, only Kelly can’t come back through the portal. With Brandy and Ash back in the real world with Pablo they set about planning to get Kelly back.

Meanwhile at Ruby’s house, her and Kayla are trying to figure what to do now that their plans are in ruins. Kayla has kidnapped the last remaining Knight of Sumeria and Ruby comes up with an idea…

A really good episode, this one. The whole episode had a really good ebb and flow to it and it intercut the concurrent stories in a more traditional way and it certainly work well for this episode. So onto the two burning questions I have –
So Kelly can’t return to her body as (I assume) her body is currently occupied by Kayla – how do they remove Kayla? And just on that if Dalton didn’t sacrifice himself, how could he return with his body destroyed?
With only two episodes to go, my only wish is for a season 4 however unlikely this may seem.