We join Zoe in the midst of a Ruby and Kayla inspired ritual to save their skins… be removing a chunk of Zoe’s and creating a new page of the Necronomicon. The Dark Ones are coming and this is Ruby and Kayla’s last shot. As Zoe spouts some cold ass shit to say to Ruby and Kayla – Kayla ain’t having any of it and gouges her eyes out and cracks her skull open.

Ash, Brandy and Pablo are back at the house trying to regroup, Brandy feeling the effects of being brought back to life but vomiting non-stop (Ash of course doesn’t suffer the same fate – and he doesn’t get hangovers either). Pablo becomes connected to the book and sees Ruby and Kayla and they figure out the Kayla is inhabiting Kelly’s body and Ash decides to go get it whilst Pablo goes to the rift. Whilst at the rift, the Dark Ones arrive on the search for Ruby and Kayla.

Meanwhile Brandy is battling the evil herself at Ash’s house and in one of the many great call backs of this sequence gets chased by the evil and then fights a sentient mobile phone before having to saw her arm off – alas it is a trick but it was still a great image. Brandy immobilizes the phone before mulching it to death, muttering the immortal line – ‘Who’s laughing now? 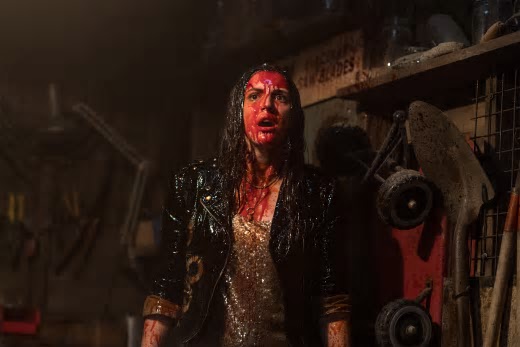 Ash uses the Necronomicon to contact Pablo and they meet up near the hardware store but the Dark Ones arrive and reattach the last pages of the Necronomicon, as they do the ground rumbles and shakes and a giant demon rises from the earth – it’s time to test the mettle of man.

Ash now has to face down his greatest adversary Kandar The Destroyer but first they have more pressing issues. As they are chased by the Deadites Brandy has am ‘Ash’ moment after the chasing Deadites start chanting ‘Dead By Dawn’ Brandy stabs it squarely in the face and Ash couldn’t be prouder. As Ash, Brandy and Pablo take stock Ash has a moment, breaking down about why he was chosen and how he is a failure (it’s a stellar bit of acting from Campbell). Brandy tells him to buck up and get back on the demon killing horse, this stirs Ash into action but first things first, Ash gets baked. 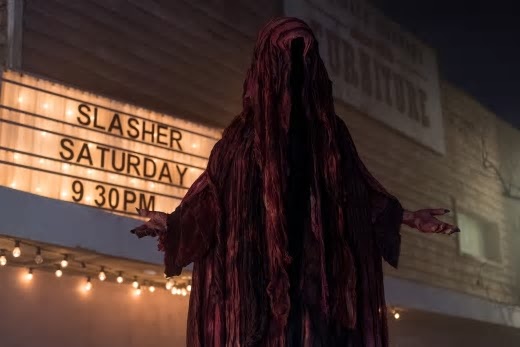 Ash and Brandy have another emotional moment (man, this episode is full of them), Ash wants to save Kelly’s soul but to get there unseen Ash and Brandy will have to go into the sewer to get to the rift. Pablo meanwhile wheels Kelly’s body through the hell that is now Elk Grove as Kandar The Destroyer…well destroys.

Back in the sewer Ash give Brandy the necklace from the Evil Dead films and in some way despite this not being a known final episode it certain felt like it. Ash and Brandy go to town on a horde of Deadites as Pablo is setting up the rift to get Kelly. Pablo says he thinks he can go in and get Kelly as he has one foot in each world, as Pablo goes into the rift Ash and Brandy fight off some more deadites, both ending in a bloody mess. Pablo comes flying back through the rift and Kelly doesn’t wake up… until suddenly jolting awake, she looks like death and Pablo kisses her in a sweet moment.

Our group runs to the surface and ends up in the middle of an army battle against Kandar. Ash realises his fate and in yet another emotional scene says good bye to Brandy, tell Pablo he is now El Hefe and tells Kelly that she is the strong leader that everyone needs – Ash owns up to who he is and faces down the demon – in a tank. Attaching the Kandarian Dagger to a missile, Ash manages to fire it into the mouth of the demon and the demon falls on Ash’s tank.

Ash is dragged away from the scene in a bunch of blurry moments, the only thing in focus is a Knight of Sumeria ring that his rescuer wears. Ash wakes in a box, in a concrete bunker. Ash he staggers out of the room, he is met by an android. The android takes him into another room and opens the large doors, Ash seems a post-apocalyptic landscape. The android then unveils the Delta – only it looks like it belongs in Death Race 3000. Ash demands to know what is going on and where his daughter is and the android responses saying that she will explain while he drives, as the Dark Ones are on the move. Ash climbs into the Delta and gets set for takeoff, the android asks Ash how he is feeling – it’s a one word response…
Groovy.

Well that seems like that is it for AvED. A full three seasons of a something that Evil Dead fans could only really hope for in their wildest dreams and whilst it is a major fucking bummer that we won’t get to see where this season 4 could have gone, this is a perfect ending and a tease that will never been brought to fruition. One of my personal all time favourite TV shows and will remain so from now until a demon apocalypse destroys the world.