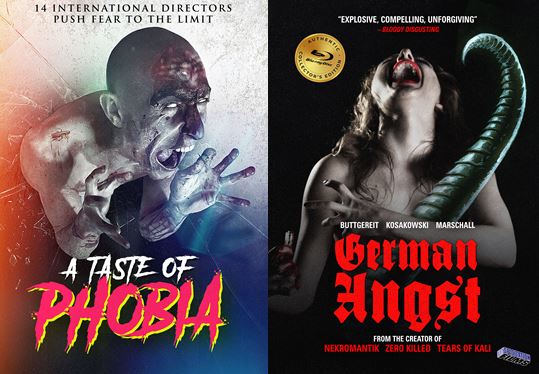 German Angst & A Taste Of Phobia…

Artsploitation Films will release two eye-popping horror anthologies on June 26th. Fourteen different directors peer into the twisted and often self-violent world of phobias in A Taste of Phobia. Also, on that date will be a special-featured-packed Blu-ray release of German Angst. Love and sex has never been portrayed as so depraved and disturbing as seen by three controversial underground filmmakers, the legendary Jörg Buttgereit (Nekromantik(1987); Andreas Marschall (Tears of Kali (2004); and Michal Kosakowski (Zero Killed (2014).

Note: German Angst is a Blu-ray re-issue, as the film has been out on Blu-ray previously. But the original release was a barebones Blu-ray-R while this Artsploitation Films release will be of the highest HD quality and will contain many bonus features.

For more information go to www.artsploitationfilms.com