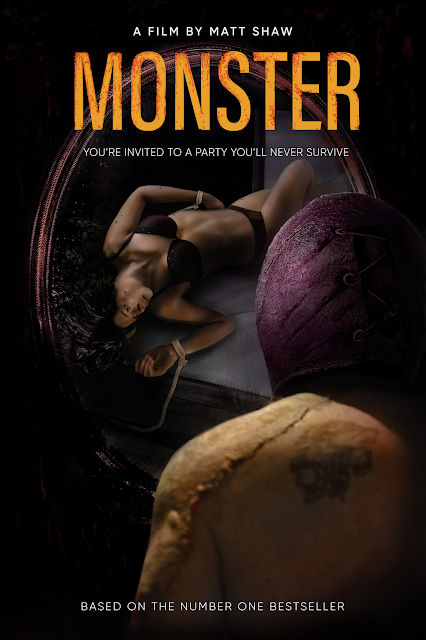 Check out the details and first images of Monster.

MONSTER is based on the bestselling book of the same name. It is directed by author Matt Shaw. Matt is the published author of over 200 titles. With his work endorsed by Horror heavyweight Shaun Hutson, Shaw has been a full time author for over 6 years, regularly found in the top 100 Most Popular Horror Authors (reaching position 5). The book itself hit number one on Amazon’s Horror Charts (beating the likes of Stephen King) several times since its release in 2014.

The feature film -a cross between The Texas Chainsaw and Natural Born Killers – stars Tracy Shaw (Coronation Street), Rod Glenn (American Assassins), Danielle Harold (EastEnders and Fanged Up) and Laura Ellen Wilson. An uncomfortable tale exploring the theme of nature versus nurture. Who’s the real monster? Despite the horrors on screen, there are quotable one-liners and black comedy laced throughout with scenes that will stick to the imagination, such as the human birthday cake…

Synopsis
Emily is tired of her life. In a dead end job that she hates and an employer who takes advantage of her, she dreams of a life away from the daily grind. Her life will take an unexpected turn, however when she is snatched from work and bundled into a van. She awakes later in the isolated Remington home, a place of death and violence where depravity and horror are the norm. Led by the fearsome Richard, the undisputed head of the household, Emily discovers that the Remington’s are organizing a very special birthday party and she is the guest of honor.

When the birthday boy – the Remington’s seven foot tall hulk of a son appears, Emily realizes she is more than just a guest and their intentions for her are much more sinister. A tale of harrowing violence and tragedy, Monster reaches new depths of horror and cruelty as Emily fights for her life against a family which know nothing of remorse or compassion. As the story unfolds we discover that some men are born monsters, and others are made as a product of their upbringing.