The North Bend Film Festival is right around the corner and we’re thrilled to announce the full line-up for our inaugural edition, including Cinema Vista and Something Strange feature and short film programs. In addition to the films, the weekend of August 23rd to the 26th will be rich with events that embrace the town of North Bend, once the original shooting location for David Lynch’s Twin Peaks, such as a special Twin Peaks Tour, a scenic mountainside hike (offering attendees a rare chance for excursion!), and ‘Damn Fine Coffee’ mixers to kick off the mornings just right.

Centerpiece Film co-presented by The Stranger

For the festival’s centerpiece, we’re excited to showcase Sandi Tan’s docu-mystery SHIRKERS, a visual and emotional rollercoaster powered by a dreamer’s redemptive love of cinema.

Shirkers (Washington Premiere)
USA | 2018 | 96 Min | Dir. Sandi Tan
Cinema-loving teenager Sandi Tan and two friends had a big idea in 1992: They’d shoot their own super-low-budget assassin thriller on their native streets of Singapore, along with help from an American mentor named Georges. Then, one day, Georges disappeared along with all of their work. Twenty-five years later, Tan has turned her investigation into Georges’ motives, using newly recovered footage and firsthand accounts, into one of 2018’s best documentaries, an autobiography turned love letter to filmmaking dreams, especially those that have gone unfulfilled.

My Name is Myeisha
USA | 2018 | 84 Min | Dir. Gus Krieger
A bold and visionary musical unlike anything on screen today, Gus Krieger’s MY NAME IS MYEISHA blends hip-hop, beat-boxing, dance and spoken word lyricism to tell the heartbreaking story of a teenage girl killed by police while she sat unconscious in a locked car. It’s essential filmmaking in a dynamic and energetic combination of storytelling methods precisely executed from beginning to end. 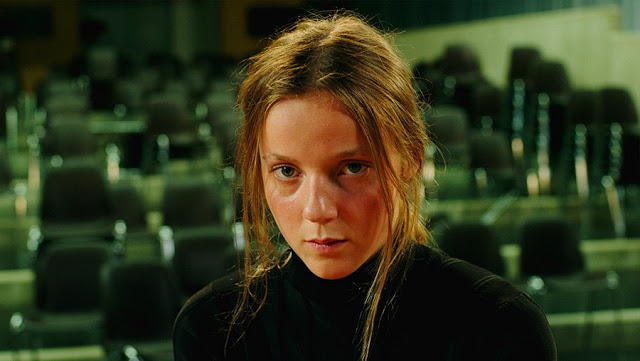 Sarah Plays A Werewolf (West Coast Premiere)
Switzerland/Germany | 2017 | 86 Min | Dir. Katharina Wyss
Off the stage, 17-year-old Sarah drifts through her community in anonymity. But on her high school’s theater’s stage? The shy girl unleashes torrents of fiery passion, stemming from personal secrets mostly involving her unpleasant home life. As Sarah falls deeper into her performances, though, her loneliness intensifies, causing the troubled teenager to lose herself in multiple ways. Drenched in an overriding sense of despair, Swiss filmmaker Katharina Wyss’ devastating feature-length debut is a coming-of-age stunner.

My Own Private Idaho (1991)
USA | 1991 | 104 Min | Dir. Gus Van Sant
Set in the 1990’s runaway-dominated streets of the Pacific Northwest and loosely based on Shakespeare’s Henry IV, this seminal film by Gus Van Sant (GOOD WILL HUNTING, MILK) tells the tale of a narcoleptic street kid named Mike (River Phoenix) who befriends a fellow hustler (Keanu Reeves) on his journey to find his estranged mother. Film presented in collaboration with Three Dollar Bill Cinema

Take a chance on Something Strange with our focus on wonderful and strange cinema, including the North American Premiere of offbeat (and slightly inanimate) love triangle BILLY and musical festival closer ANNA AND THE APOCALYPSE!

Genres and holidays come together in a ferocious and musical blender for John McPhail’s ANNA AND THE APOCALYPSE, a redefining submission to the coming-of-age genre and the perfect way to end the fest.

Anna and the Apocalypse (West Coast Premiere)
United Kingdom | 2018 | 92 Min | Dir. John McPhail
For Anna and her friends, high school graduation can’t come soon enough. Unfortunately for them, they must face a horde of yuletide undead creatures before passing on to adulthood. A zombie apocalypse-Christmas-comedy-musical (yes, you read that right), “Anna” is a salute to a genre you didn’t think you needed, while keeping you on the edge of your seat with its hilarity and heart.

Piercing (Pacific Northwest Premiere)
USA | 2018 | 81 Min | Dir. Nicolas Pesce
After kissing his wife and baby goodbye for a seemingly normal business trip, Reed (Christopher Abbott) checks himself into a hotel room to accomplish something he’s always dreamed of: the perfect murder. As his sinister plans unfold, he soon realizes he might be in over his head with a mysteriously unhinged call girl named Jackie (Mia Wasikowska).

Relaxer (Washington Premiere)
USA | 2018 | 91 Minutes | Dir. Joel Potrykus
Joel Potrykus’ latest film follows an obsessive couch potato slacker taking on his most epic challenge yet: to beat the impossible final level of PAC-MAN without ever leaving the couch. His desperate quest is fraught with gross-out humor and darkly comedic perils as all sense of time is lost and takes a turn towards downright mania in a satisfyingly exhilarating conclusion. 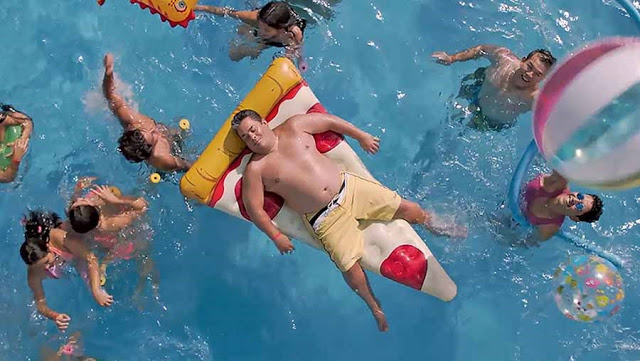 Time Share (Washington Premiere)
Mexico/Netherlands | 2018 | 96 Minutes | Dir. Sebastian Hoffman
A father’s holiday from Hell begins when a clerical mix-up forces his family to share their vacation home with another family. But lurking beneath the paradise resort is a shady organization with designs far worse than double bookings. Director Sebastian Hoffman’s psychological thriller expertly juxtaposes terror and surrealist comedy through weaving stories of the family man and a beaten down employee setting out for revenge from within. Screening presented by Snoqualmie Valley Real Estate.

Billy (North American Premiere)
Netherlands | 2018 | 90 Min | Dir. Theo Maassen
Ventriloquist Gerard de Groot and his puppet Billy have been inseparable for the last ten years. Until the moment they fall in love with different women and Gerard decides to take a break from his wild dummy. Easier said than done. Theo Maassen’s promising debut is a sharp tragic comedy mixing raunchy humor and deep thoughts about a career as an artist.

Don’t miss the previously announced film in this section, World Premiere of MODEL HOME, with director and producer in attendance!

Boundaries are made to be pushed. This visionary group of shorts showcases the work of some of today’s most innovative and forward-thinking filmmakers. Across all genres, these films represent the vanguard of cinema with stories of life, death, justice and injustice, monsters both real and imagined, and the horror and beauty that reside inside the human heart. At times tragic, fantastical, terrifying, rousing, but always exhilarating, these shorts are at the forefront of filmmaking.

MOBIUS, dir. Sam Kuhn
In the wake of her lover’s death, a high school student comes to terms with her suburban malaise in this dreamlike and TWIN-PEAKS-esque dose of small-town oddness.

BIOPHILIA, dir. Marina Michelson
Rachel and her boyfriend, a pair of Brooklynites, decide to try their hand at farming. But when a sheep dies on their watch, Rachel must make a tough decision.

EUPHORIA, dir. Wynter Rhys
Too focused on his adoring followers and eager paparazzi, a famous artist constantly neglects his 6-year-old daughter. His rabid fan base is ready to change that.

JOUSKA, dir. Wynter Rhys
A man’s dark past and guilt-ridden thoughts come to a head as he navigates a nightmare land that’s like ALICE IN WONDERLAND laced with PCP.

BAILAORA, dir. Rubin Stein
Clearing out bodies on the streets of a war-torn Spain, a group of soldiers encounter a young dancer whose moves have an effect beyond explanation.

THE DAY MUM BECAME A MONSTER, dir. Joséphine Hopkins
Divorces are extremely tough on all children, but especially for young Candice. As if being abandoned by her father isn’t hard enough, her mother begins exhibiting some very troubling new behavior. 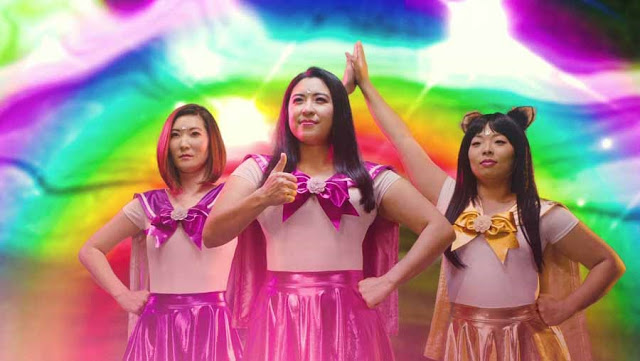 Sometimes stories are told to make sense of a nonsensical world, to impose logic on life’s confusion. Sometimes stories celebrate this bewilderment, utilizing the strange and unexpected instead of explaining it. These surreal short films feature superheroes, tampon monsters, vengeful robots, hungry forests, ghastly futures and purgatorial loops. Collected together, this block captivates as much as it challenges convention.

END TIMES, dir. Bobby Miller
After randomly stumbling across a dying squirrel in a public park, a man’s day goes from odd to WTF in this delightfully morbid comedy from the director of THE CLEANSE.

LOVELY LEGS, dir. Abby Thompson
In an isolated forest, a young man is ready to finally part ways with his female sex robot. As they say, though, it’s always hard to say goodbye.

OVUM, dir. Cidney Hue
Undergoing a mind-altering medical procedure, a woman is forced to make the toughest decision of her life.

CIRCLE, dir. Martin Melnick
Loosely based on the myth of Eurydice, this off-kilter, genre-bending allegory follows a woman whose past traumas send on a fateful and dangerous trip through Purgatory.

ALLEN ANDERS: LIVE AT THE COMEDY CASTLE – CIRCA 1987, dir. Laura Moss
During an infamous on-stage performance in 1987 at New York City’s Comedy Castle, stand-up comic Allen Anders lost his mind. This is the uncovered footage.

BFF GIRLS, dir. Brian Lonano
A trio of nerdy American girls transform into powerful and fearless Japanese superheroes in order to take down a villainous tampon monster. A coming-of-age tale like none other.

North Bend is proud to announce our jurors for the first year for shorts, features and VR!

Previously announced titles for 2018 include:

Profile (West Coast Premiere)
Cyprus, Russian Federation, UK, USA | 2018 | 103 Min | Dir. Timur Bekmambetov
Amy, a struggling freelance journalist looking for her next big story, pitches her editor on investigating the recruitment of European women by ISIS. Pretending to be recently converted to Islam and using an alias, she creates an incriminating Facebook profile where she begins to like and share posts themed around Islamic extremism. It doesn’t take long for Bilel, a Jihad fighter in Syria, to set his eyes on this seemingly vulnerable prey.

Model Home (World Premiere)
USA | 2018 | 82 Minutes | Dir. Patrick Cunningham
For a Latina single mother and her imaginative young son, being allowed to live in a dream house rent free seems too good to be true. As the mother’s obsessive and unstable mental state emerges, so too does living the American Dream devolve into a waking nightmare. Director Patrick Cunningham’s fascinating debut is a horrifying singular vision that speaks to Hispanic American identity.

For more information on the North Bend Film Festival visit our website – http://northbendfilmfest.com/

Festival badges can be purchased now at – http://northbendfilmfest.com/badges/