Playing at The Brooklyn Horror Film Festival BOO! is an examination of a family in decay…

It’s clear from the jump that not all is right in this family. There is tension between everyone of them and no one seems to know or care enough to fix it. Mom is a drinker, Dad is a religious zealot, daughter Morgan is rebelling hard against it all whilst the young boy Caleb is watching his family implode. 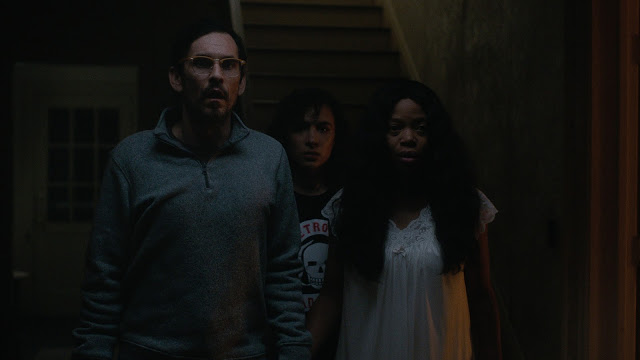 When the family receive a paper bag of the front porch, they find that it is a Boo – which is essentially a chain letter you have to pass on otherwise the ghosts and ghouls will bring the scares to you. Of course Dad being on the high horse of religious piousness is having none of it and they don’t recognize Halloween, so he burns the note. We all know it is a bad idea to do that. Caleb says the family will be cursed and they may just be true…

The entire cast is great everyone in the family is great and it enhances the films ability to get under your skin. The family communication with each other is best described as forced but it is also strange and because of this it is unsettling. When things start to get weird, the dynamic changes and the acting does too – whatever the scene calls for everyone nails their roles.

The film is beautifully shot, cinematography by Nicholas Wiesnet who has a good eye for making to use the suburbs as figurative spook show and director Luke Jaden gets some great shots, in fact the whole film is meticulously staged. Jaden and Michelle have written a really great script, it slow builds and builds and as the family each begins to have their own nightmare visions, all their previous fears and backgrounds become clearer and it sets the film up for a really frightening last 20 minutes and a hard ending.

Of course BOO! at its heart, is about family and communication. The two things that bind people together. BOO! is a cracking debut and I can’t wait for what is next, you should definitely see this film.