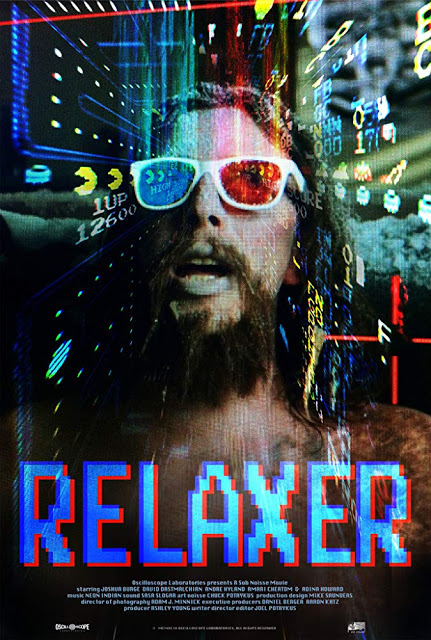 Relaxer is a nightmare for couch potatoes, a slow building slacker dread framed around the Y2K bug and the laziest motherfucker that just can’t or won’t help himself.

Abbie (Burge) is a gamer nut that lives (or squats) with his brother Cam. Cam likes to punish Abbie with a series of challenges, dumb, meaningless challenges, however Abbie has failed at each one he has tried. During his most current challenge a milk drinking challenge ends the way you would expect, to redeem himself and make sure he has a roof over his head for a little bit longer Abbie asks for the ultimate challenge – Pac-Man. He has to beat the infamous 256th level, so he wins money and can stay with Cam – oh and not leave the couch until the challenge is complete…

Relaxer crosses a number of genres on its way, starting out as a grim, grimy gross-out comedy and traverses across genres and arrives in a place that you probably wouldn’t expect but are totally accepting of. The writing is excellent, Joel Potrykus creates his own world, inside a 1999 year that was plagued with enough paranoia in and of itself. It is that paranoia that he dwells on and Abbie drags the audience into his world. Lazy but anxious, paranoid but with just a hint of hope. A world that is filled with morons, Andre Hyland shines as a completely hilarious friend/acquaintance and is a real highlight, his seriously rapid fire delivery and cuttingly funny dialogue will have you laughing from the moment he enters the room. As the Pac-Man challenge progresses, things start to get a little absurd, then a little bit poignant and then back to absurd again, it is this switching that holds you in the moment and that is quite a feat as the film never leaves the squalid apartment and the couch is hardly ever out of the frame. 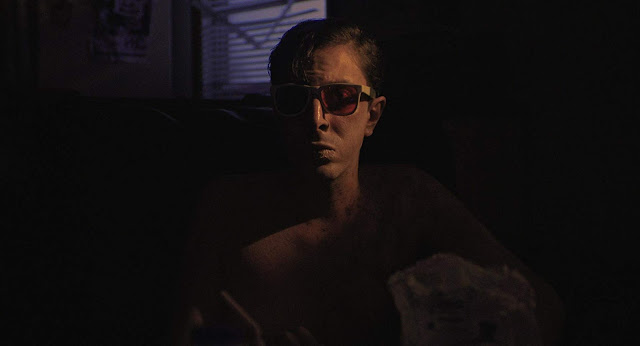 The sound design for the film also works without you realising it until toward the end of the film, the constant Pac-Man sounds and various moments happening outside the apartment end up as a vital part of the film, making the climax all the more realised. The small cast is great, Burge obviously gets the most time and he is fantastic in this film.

Relaxer once again proves that indie film making is where the most interesting films are, untethered and willing to go to unexpected places. The Y2K bug may have fizzled but Relaxer does not, ending in the most perfect and homage filled ways.

Relaxer is in cinemas March 22