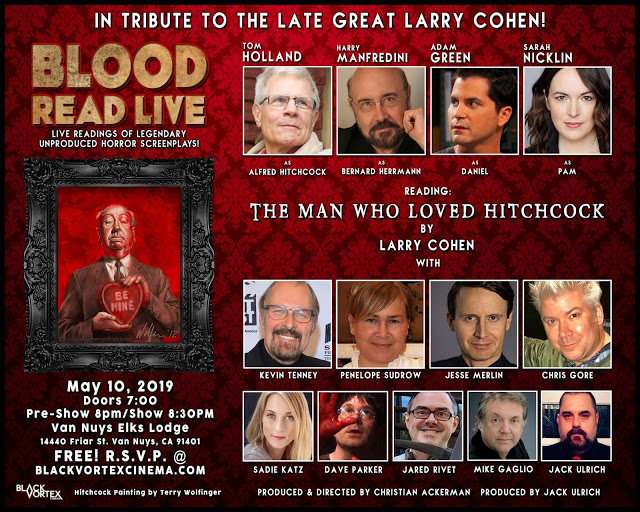 The Man Who Loved Hitchcock…

On Friday, May 10, 2019, Black Vortex Cinema will present Blood Read Live: The Man Who Loved Hitchcock by Larry Cohen at the Elks Club in Van Nuys, CA.

Free tickets are available at https://www.blackvortexcinema.com/

The Man Who Loved Hitchcock is a comedic, murder-mystery about a man who steals the private murder scene notes of Alfred Hitchcock to inspire a killing spree. Teaming with a young renegade filmmaker, an aspiring actress, and his ex-friend & collaborator Bernard Herrmann, Hitch must stop the murderer before he kills them all!

About the screenwriter:
Larry Cohen began his career 50 years ago in television, eventually breaking into the independent film scene in 1972 with Bone, starring Yaphet Kotto. A trailblazer in the blaxploitation scene, he wrote and directed Black Caesar and its follow up, Hell Up In Harlem, both starring Fred Williamson. Next, he began a career in horror thrillers, starting with It’s Alive and continuing with God Told Me To, Q: The Winged Serpent, The Stuff, Maniac Cop, Uncle Sam, Phone Booth, Cellular and Captivity. His massive body of work always blended a signature style of dread, social commentary, wicked humor, and a truly rebellious, independent spirit.