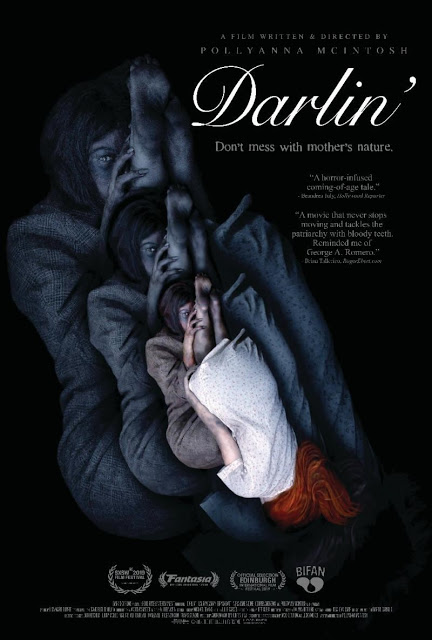 Darlin’ starts with The Woman (McIntosh) dropping off Darlin (Canny) at the local hospital, Darlin is feral, dirty and naturally the ‘civilised’ world comes to her ‘rescue’ to clean her up. With no legal documents or family vouching for her, Darlin is turned over to local girls reform school, run by The Bishop (Batt). The Bishop plans to tame (read: exploit) Darlin’ for the glory of God & church (and the subsequent dollars of course). Things don’t go as planned, with The Woman on her way back to claim Darlin, whilst Darlin has some plans of her own.

In 2011’s The Woman, the anger was aimed directly at misogyny and the control and denigration of women. Darlin’ still has the anger firmly in hand but this time religion, women’s body rights and the institutions (both social and cultural) that try to control and define those on the outside of them are in this films sights.

By now we all know just what great actor McIntosh is and she proves it once again here, despite have a more limited role, Canny is fantastic as Darlin, embracing the animalistic and human sides of her character, it is a role that should get her more work. In fact everyone in the film is spot on, it’s a small cast but everyone hits their marks.

This is Pollyanna McIntosh’s first time directing and writing a film. The direction is excellent, getting the most of the scenes and her actors. The writing is a little muddled however in terms of getting themes across. You easily understand these themes but they aren’t fully explored before the next theme takes away from the one before. The film has plenty to say and says it all but somethings do get lost in the wash of it all. Whilst this film isn’t as graphic as the previous installments there are certainly some gruesome scenes that play out in front of your eyes.

The film has thick streak of black humour, never more so evident and blatant than the killing of a hospital clown, there are other moments scattered throughout the film. This black humour plays against the serious tone of other events in the film and it results in the film not quite coming together.

McIntosh drags all the bullshit of this world out into the light and highlights it and tears it down because it is deserved. An assured debut for Pollyanna McIntosh and one that makes me want to see more.