Indonesian horror is on the up, the Satan’s Slaves remake was remarkable and you can add Dreadout to the list as well. Based on a PC game of the same name, Dreadout is South Asian teen horror by way of The Evil Dead.

Looking to increase their popularity through recording their adventures and uploading to their social media accounts, Jessica, Beni, Dian, Alex, Erik, and Linda decide to check out an abandoned apartment that is infamous for a horrible crime that happened there. After persuading the security guard to let them into the apartment, they are told they can go anywhere but the 6th floor. So, of course they make the bad choice to go to the 6th floor and end up invoking a portal to another world.

I have never played the Dreadout game, so I can’t vouch for how closely it follows the game (research tells me that is it meant as prequel to the game) but as a film it is fun, if not shallow ride. The portal idea is great and realised simply as a small pool of water that takes you through to the other dimension/world. Unfortunately for our teens on the other side of the portal is the Red Kebaya Lady who is the guardian of this world, a very cool character that represents the big threat. 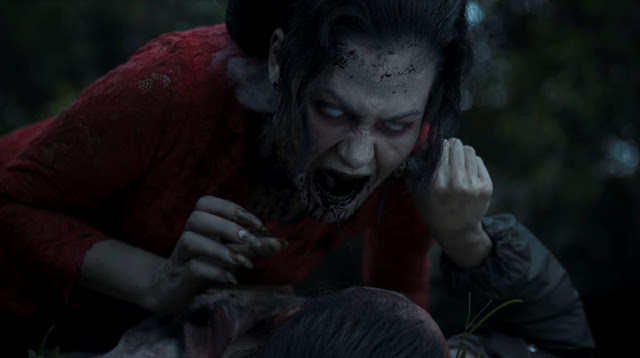 Stamboel’s script has little substance to it but the film really doesn’t want to hang its hat on the story at all. No, this film is about the atmosphere and the visuals and in both those respects Stamboel succeeds. The atmosphere created makes the audience rife for a jump scare (of which there are a few well executed ones) and that is half the fun but the visuals are the true standout. Gorgeously shot and using a mix of make up and CGI the film makes the most of its other worldly areas and the creatures within it. 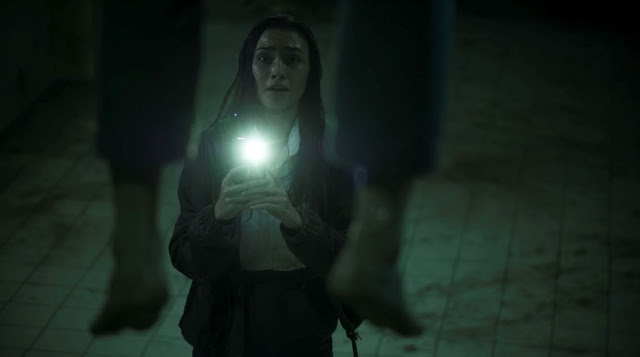 Let’s not forget that this film is aimed at teens, so there will be a few moments of dumb decision making but that isn’t a big issue and certainly not one confined to this film alone. The use of the mobile phone camera flash to ward off the creatures, will no doubt have some rolling their eyes but it plays perfect to the films demographic and with phones now becoming not only communication devices but for some people it is their source of fun or income, and for others it is their world, so a phone being the ultimate weapon makes perfect sense.

The acting from the ensemble is fine, no one has any real meaty or emotional moments, so no one really stands out above everyone else, however the security guard (Lucock) does have some great one liners.

Dreadout is young, dumb and fun and there is not a thing wrong with that.

Played as part of the Fantasia Film Festival 2019