Festival badges are on sale now!  Individual tickets on sale Tuesday at 10am! http://brooklynhorrorfest.com/badges/

Hot off the heels of its first wave announcement, which included Opening Night Film THE BEACH HOUSE and DANIEL ISN’T REAL as Centerpiece, the Brooklyn Horror Film Festival, which will return for its fourth edition from October 17–24, has unveiled the rest of its jampacked 2019 slate of diverse feature premieres and over 40 short films.   Ready to end the festival’s week with multiple literal bangs, BHFF will host director Joe Begos for the New York Premiere of his new raucous, Fangoria-backed siege knockout VFW as its Closing Night Film. The screening will be held at the Nitehawk Cinema in Prospect Park, BK, with Begos in attendance, followed by the Fangoria Closing Night Party.

VFW New York Premiere USA | 2019 | 92 Min | Dir. Joe Begos
A tight-knit group of grizzled military veterans (played by a formidable cast of genre fan favorites, including Stephen Lang, William Sadler and Fred Williamson) just want to have a laidback night of hard boozing inside their VFW digs. Too bad for them, though, that a gang of punk drug dealers and supercharged addicts have other plans for their unsuspecting elders. Coming off of his excellent descent-into-hell eye-opener BLISS, horror grime master Joe Begos puts his bold stamp on the good old-fashioned “siege movie” with this gore-drenched and delightfully sleazy adrenaline rush.
Director Joe Begos in attendance.  Creepy kids, pissed-off demons, and indigenous zombie cinema round out BHFF 2019’s feature film lineup

Blood Quantum US Premiere Canada | 2019 | 96 Min | Dir. Jeff Barnaby
In the midst of a zombie outbreak, all hope seems lost, but there’s one glimmer of salvation: A small Indigenous community populated by folks who are somehow immune to whatever is turning people into undead flesh-eaters. Having been marginalized and persecuted for their entire lives, though, the lucky, and still healthy, residents see an opportunity to both keep themselves alive and pay back those who’ve wronged them by keeping their community’s entry ways closed. And with that, Canadian filmmaker Jeff Barnaby has conceived one of the cleverest uses of the socially potent zombie template, carrying the torch for the late George A. Romero in the process—not to mention Tom Savini, thanks to an excess of viscera.

Mystery Of The Night US Premiere Philippines | 2019 | 105 Min | Dir. Adolfo Alix, Jr.
In the colonial Philippines of the 1900s, a young woman who’s been raised by creatures in the woods meets, and falls in love with, a man from town. Soon enough, though, her new romance goes sour, prompting her to make him pay in ways you’ll need to see to believe. Cloaked in a hypnotic ambiance from its opening frame, Adolfo Alix Jr.’s MYSTERY OF THE NIGHT takes its time building up character and conflict before erupting with a dynamite supernatural payoff that’s shockingly primal. Behold one of 2019’s most unique horror gems.

In The Quarry East Coast Premiere Uruguay | 2018 | 82 Min | Dir. Bernardo and Rafael Antonaccio
Excited to introduce her new boyfriend to her longtime friends, Alicia sets up a hangout session at an abandoned quarry near her hometown. At first, it’s all good times, with food and drinks abound, but as the day progresses, secrets are revealed and bonds are broken. And before the day is over, lives will be lost. Uruguayan filmmakers Bernardo and Rafael Antonaccio mine pure darkness and unpredictable brutality from their characters’ frayed dynamics in this tense and excellently acted riff on naturalistic heart-of-darkness genre fare the likes of Polanski’s KNIFE IN THE WATER.

Monument East Coast Premiere Poland | 2019 | 108 Min | Dir. Jagoda Szelc
Waking up to discover their bus driver gone, a group of hospitality majors arrive at a hotel in the middle of nowhere. The take-no-shit hotel manager greets them with the first lesson of their internship—no one cares what your name is. This loss of identity is followed by menial cleaning tasks and as one night bleeds into the next, the students begin to explore the dark recesses of the hotel. Mythic and tantalizing, Director Jagoda Szelc’s sophomore feature channels the waywardness and palpable rage of youth.

This Is Our Home USA | 2019 | 73 Min | Dir. Omri Dorani
Shaking off a tense roadside encounter with some strangers, Reina and her boyfriend, Cory, arrive at her childhood home. The quarreling couple are attempting to overcome a difficult decision that has put a deep strain on their relationship: the abortion of their first child. Late that night, there’s a knock at the door. It’s a young boy claiming to be their son. Disturbingly batshit in its exploration of unresolved grief and regret, THIS IS OUR HOME begs to be discussed and deciphered.
Director Omri Dorani, actress/producer Simone Pellicano and producer Jeff Ayars in attendance. Brooklyn gets Slayed! again with LGBTQ shorts block and duo of Queer Horror features

Spiral North American Premiere Canada | 2019 | 87 Min | Dir. Kurtis David Harder
To get away from the city life, same-sex couple Malik and Aaron and their teen daughter, Kayla, move to a small suburban town in the mid-’90s. Unfortunately, they’re greeted right away with homophobic threats. When Malik witnesses a strange gathering in the neighbor’s house, he starts to fear for their lives. A queer horror game-changer, SPIRAL uses the genre to call out the deep-rooted fear of the other in America and expose the cycle of hate as the most corruptible, ancient evil of all.
Director Kurtis David Harder in attendance.

Locally grown Home Invasion program resurrects with more features than ever before, including the World Premiere of ‘FESSENDEN’S DEPRAVED: Making Frankenstein in a Brooklyn Loft’

Fessenden’s Depraved: Making Frankenstein in a Brooklyn Loft World Premiere USA | 2019 | 75 Min | Dir. Larry Fessenden
With the release of Larry Fessenden’s DEPRAVED, horror fans have finally seen a new film from one of New York City’s, let alone that of the horror genre as a whole, most influential indie filmmaking legends, his first since 2013’s BENEATH. But for Fessenden himself, the journey to get his audacious and Brooklyn-set modernization of Mary Shelley’s FRANKENSTEIN made has taken much longer and proven the values of both dedication and determination. In this feature-length documentary, Fessenden offers an intimate look at bringing his most ambitious passion project yet to life. It’s an all-access dive into one of 2019’s best horror films, and BHFF will have Fessenden himself on hand to break DEPRAVED’s production story down even further. Frankly, it doesn’t get more authentically “Brooklyn Horror” than this.
Director Larry Fessenden in attendance.

The Shed East Coast Premiere USA | 2019 | 99 Min | Dir. Frank Sabatella
Stan, Roxy and Dommer are lifelong friends whose bond is being tested by the ever-taxing rigors of high school. For Stan and Dommer, in particular, the daily bullying they encounter comes in second only to watching Roxy’s popularity grow, and, in turn, her closeness to them dissipate. But there’s an unexpected possible solution to their problems in Stan’s backyard: a nondescript-looking toolshed, which houses something inhuman. Centered around the unlikeliest of villains, Frank Sabatella’s THE SHED takes what could have been a goredrenched monster movie romp and layers it with potent coming-of-age anxiety and youth-incrisis urgency. Don’t worry, though: There’s still carnage aplenty.
Director Frank Sabatella in attendance. 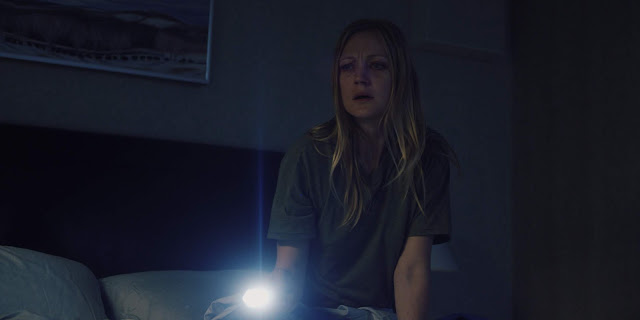 The Swerve East Coast Premiere USA | 2019 | 95 Min | Dir. Dean Kapsalis
High school English teacher Holly (Azura Skye) has always taken the stress and thanklessness of motherhood in stride, but a dark secret weighs heavily on her. The sudden appearance of a mouse and a betrayal by her self-absorbed husband send her spiraling down into catastrophe as she wreaks total havoc on her life. THE SWERVE is an epic, tenacious showcase for Skye, who shreds through the screen flailing for a lifeline in director Dean Kapsalis emotionally crushing feature debut.
Director Dean Kapsalis in attendance.