There can be few things as psychologically damaging as being trapped in solitary confinement with someone you hate. For his follow-up to The Witch, Robert Eggers delivers a grim, hallucinatory story about two men shut up in a lighthouse tower, going slowly mad in their mutual loathing. Willem Dafoe and Robert Pattinson are Tom Wake and Ephraim Winslow – arriving to work for a month-long shift at a remote, rain-lashed lighthouse, somewhere off the coast of 19th century Maine.

Wake is a veteran lighthouse keeper (wickie), as salty a sea dog as one might wish to meet, complete with a straggly beard, a gammy leg, a clay pipe, and an abundant supply of liquor. He’s the senior officer, something he never lets newbie Ephraim forget, barking orders at him, belittling his work and, when the whim takes him, making him repeat his arduous daily duties if they haven’t lived up to his arbitrary standards.

When Wake isn’t capriciously ordering Ephraim around, he subjects him to endless tall tales about his seafaring days in rich, archaic language. His monologues are a robust representation of maritime legend and lore, with nods to Melville and Coleridge. At other times Wake unceremoniously expels a plentiful supply of flatulence. His bodily noises are aggravating enough, but not as exasperating as his voice.

Ephraim, by contrast, is a taciturn drifter who has come to the storm-buffeted island seeking honest work and solitude without temptations, in an effort to save enough money to get on his feet and afford some kind of independence. He’s a stern, secretive, unsmiling fellow, but with something clearly disturbing his peace of mind.

Ephraim toils and slaves all day, wheelbarrowing coal along rock-strewn coastal paths in the lashing rain, tending the machinery which grinds away with ear-splitting noise, hefting barrels of oil up the spiral staircase of the tower. At night he is forced to listen to Wake recite the same seafarers toast before each evening meal and become more garrulous as he becomes more drunk. 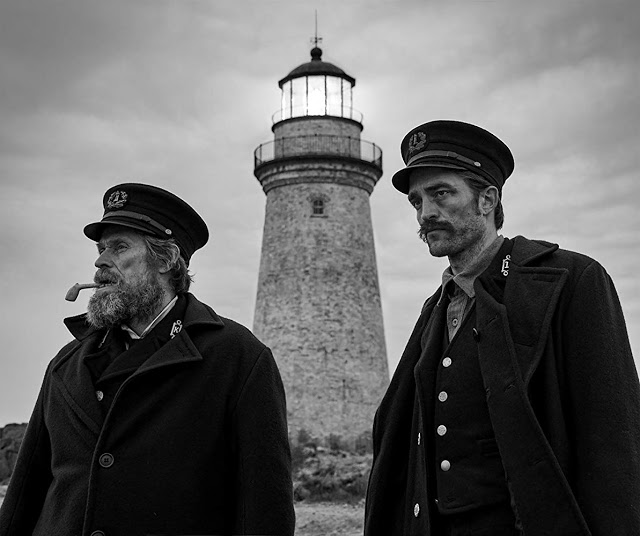 After spinning his exotic yarns, Wake finally traipses off to tend to the light, a duty he jealously guards for himself – denying Ephraim any admittance. This odd possessiveness irks his subordinate, and Ephraim becomes obsessed with discovering what Wake does when he locks himself into the top of the tower every night with the light.

The fact that Wake taunts him with tales of how his predecessor went ‘mad’ and aggressively denies him access to ‘the light’, begins to work on Ephraim like a neurosis.

Nursing this resentment and coming under the influence of Wake’s bizarre superstitions and stories, Ephraim begins to experience terrifying nightmares and hallucinatory visions of tentacled beasts. He becomes tormented by lust for an imaginary mermaid which results in desperate bouts of self-gratification between his back-breaking duties.

He’s harassed by and enters into a feud with a brazen seagull. When he tries to mention some of his frustrations to Wick, his colleague becomes dismissive and querulous.

When the day of their departure is thwarted by a violent storm, the men must batten down the hatches and submit to be stranded, possibly for an indefinite period, waiting for the weather to quieten down.

In his weariness Ephraim finally succumbs to the comfort of alcohol but then, along with the wild weather, the situation on the island becomes more and more unstable. The two men, almost constantly drunk, veer wildly between enmity, comradeship and out and out hatred. Their paranoia and antagonism become increasingly surreal, and soon the only remaining question is which one of them, both half mad already, will go violently insane first. Co-written by director Eggers and his brother Max, The Lighthouse doesn’t have a much of a conventional narrative or resolution, it feels more like we are captive witnesses to someone else’s fever dream.

To compound this sense of disorientation, cinematographer Jarin Blaschke has shot the film in misty grey and grainy black and white, giving it a striking yet timeless quality. However, he has shot it with an aspect ratio so narrow, it feels like we are being claustrophobically squeezed into the confined space of the tower with the two keepers.

The Lighthouse is audacious and provocative, offering more in the way of profound psychological dread than in horror, but for me at least, the ultimate effect was too disconnecting and alienating to fully engage with (something which I also felt with The Witch, which struck me as accomplished, but detached).

Perhaps not as commercial viable as The Witch, The Lighthouse is nevertheless a memorable and impressive piece of cinema, not least thanks to utterly committed performances from Willem Dafoe and Robert Pattinson (this film being perhaps the riskiest of Pattinson’s unerringly brave career choices post Twilight). These men give compelling, intense, fearless performances – their abrasive interaction creating mounting tension for the audience and much discomfort among the more sensitive and squeamish – it’s a primal scream in cinematic form.