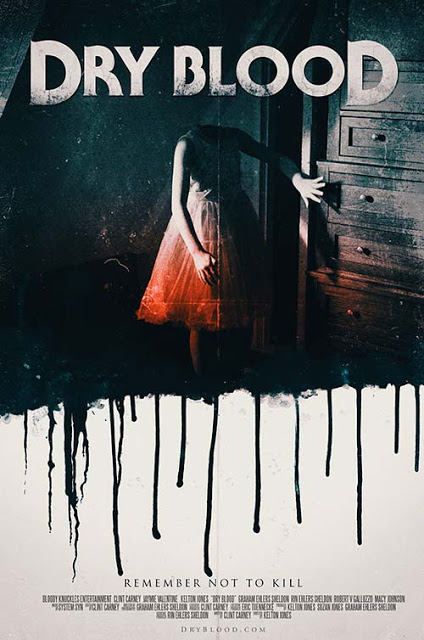 Horror films and their associated sub-genres (Paranormal, Monsters, Possession) have been used as analogies for a variety of real life issues such as addiction, mental illness, political statements. In Dry Blood, addiction is the scary thing hiding in the closet. Brian (Carney) escapes to a mountain cabin in the hopes of kicking his drug and alcohol habit and asks an ex-girlfriend Anna (Valentine) to come and help him get and stay sober. When Brian starts seeing things, the already loose Brian begins to come apart at the seams…

Dry Blood is well shot, utilising the daylight as much as lighting used in the evening shots whilst working within the low budget. Utilising some camera tricks as the films moves along, Jones directs the film with a real feel for when to up the ante, leading to a fairly brutal denouement for what was essentially a slow turn of the screw style film.

Carney wrote the film and also takes the lead role in the film. Some of the emotional scenes seem a touch out of his current range but he commits 100% to role and like it or not, he makes the role of Brian his own. Jaymie Valentine’s Anna is weary of Brian’s bullshit and it seems that she has been here, almost as if for whatever reason, she just can’t say no to him and wants to help. There is also the cop (played by director Kelton Jones), who seems to pop up just to torment Brian. Jones plays the cop like a darker version of one of cops from Super Troopers and quite honestly it works.

Where the film excels is in the moments that Brian starts hallucinating. The start of his downward spiral, involves a scary effect and with each subsequent ‘sighting’ the thing that haunts Brian get scarier each time. When the climax of the 3rd act begins, the hallucinations make sense but I did like the ambiguous nature of things (at least until the final shot). With the aforementioned violent climax of the film, it is jarring considering what has come before and perhaps that is point, with Brian being at best an unreliable narrator, so you never know if it was an act, wish fulfillment or something darker, less unexplainable.

Dry Blood is worth taking a look at, it has some good ideas and some good moments. Yes, not all the ideas are fully explored but there is more than enough here to keep horror fans interested.