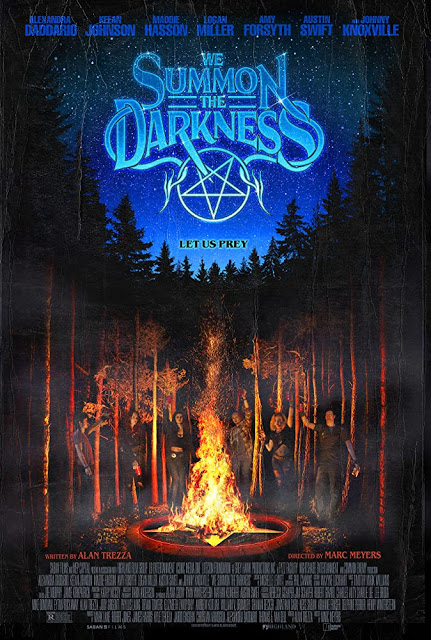 We Summon The Darkness…

Get ready to go back to 1988 and smack bang in the middle of a satanic murder spree. We meet three friends Alexis (Daddario), Val (Hasson), and Bev (Forsyth) all on their way to a rock concert, as the trip winds toward its destination, we get tidbits about what is happening around the murders and that Pastor John Henry Butler (Knoxville) is leading the charge against kids who are driven into Satan’s arms by heavy metal. After meeting three other fans of ‘Soldiers Of Satan’ the newly form sextet decide to go back to Alexis’ fathers place that is nearby and continue the party. From here, the film twists and turns and all six of the group wind up in the midst of a satanic killing spree. For spoiler reasons, I won’t go into what happens but it is surprising and for a film that started off as a seemingly party horror film things take a very dark turn. 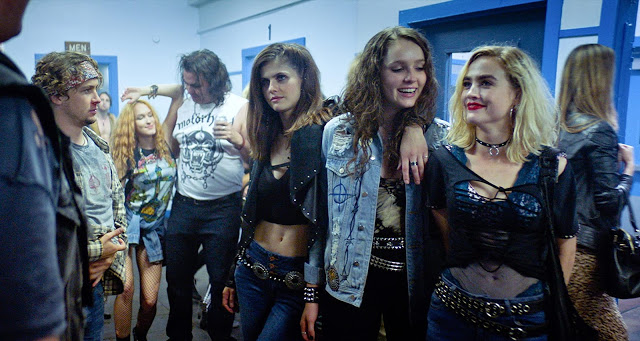 Daddario and Hasson make an excellent duo, their timing is spot on, Hasson especially looks like she is really enjoying herself, whilst Daddario continues to carve a cool niche in horror films. Their foil is Forsyth, her Bev (whilst thoroughly under written) is a calmer ying, to the other two’s panicky yang. Miller, Johnson and Swift all work well together as a band on the verge of breaking up because Mark is going to follow his dreams and move to L.A – but they all do seem like they had been together for sometime and riff off each other.

For a low budget film, it looks great. Meyers’ is skillful behind the camera in his follow up to My Friend Dahmer and manages to ring every drop out of what he has at his disposal. The script is somewhat underwelheming in terms of character development, with characters given little backstory and certainly not enough to go on bar their primary objective in the film. However, offsetting this is that the film moves quickly and has plenty of great moments for indie horror fans to get into. We Summon The Darkness is cool trip into some crazy satanic panic era horror and it is a trip that is worth taking.

We Summon The Darkness is available on VOD now.