Why Don’t You Just Die…

Review
Why Don’t You Just Die! is a kinetic, bloody splatterfest, that from minute one isn’t concerned about film ‘rules’ and blazes its own path through what can only be described as a Tarantino/Boyle/Ritchie filter with over the top of cartoonish violence that hits hard, is gory and punishing but more on the audience than our protagonists, who seem to be able to be hurt but yet are almost unstoppable.

Matvei (Kuznetsov) arrives at Andrei’s (Khaev) apartment with hammer and a determination to kill him. From there things play out in ways you can’t imagine, and barring a couple of non-linear scenes that fill in the characters back stories, we never leave the apartment. Being a crime-comedy, things aren’t always what they seem and this flips your own allegencies from minute to minute.

Sokolov does a great job in doing a lot with not much, everything is orchestrated and framed perfectly. His style certainly apes that of the aforementioned directors but he still has a style of his own, with a wicked, dark as night sense of humour. His writing is sharp too, giving his characters a pop despite them being based on well worn archetypes. 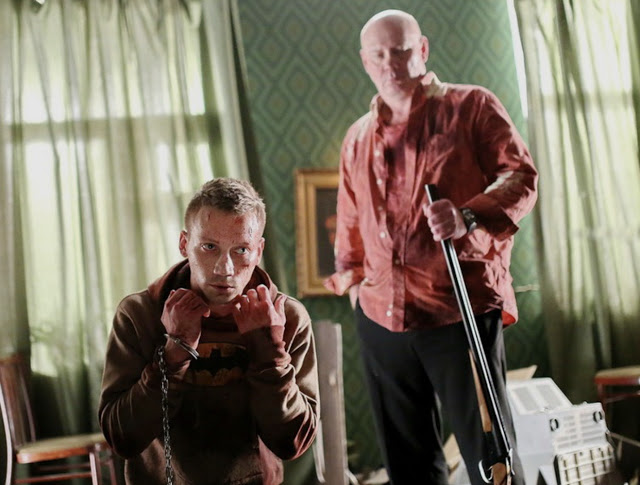 All the actors are brilliant, pitching their characters perfectly. With all the secrets, paranoia and lies every actor sells their character’s story. Something that helps sell the characters is the music stings and scores, placed well throughout the film, it just enhances the story without ever getting in the way or trying to be too clever.

Sokolov lays bare everything that happens in all its gore filled glory, not sparing anything or anyone. He keeps on piling one crazy atrocity on another, until you think it can’t go any further but then it does. The climax doesn’t quite have the same energy as the rest of the film but by that stage, you’ve seen some gnarly stuff and so a slightly (yet still bananas) calmer ending is sweet respite. Sokolov has a heap of talent and I certainly hope he gets to make many more films.