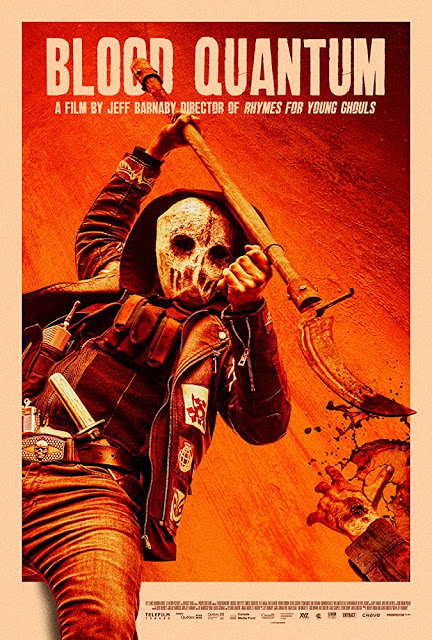 A recently and oft heard complaint is that the zombie genre is played out. The people that say this will be made to eat those words with Blood Quantum getting an early streaming release on Shudder (thanks a fucking lot Covid-19) but, you make the best of shit situation and so Blood Quantum is available to watch and it is a powerful, gory film that pulls no punches, whether it be the gore or the brutal allegorical story.

The film starts with a beautiful animated sequence and how the land and earth was created, leaving you with little doubt about who the true protectors of are. From there the film starts out like any other zombie film, its 1981 and we are in the Mi’gmaq reserve of Red Crow an area that has a town right next to it. Now gutted fish start are flopping about, dead dogs are rising and of course people start feasting on each other. After the extended prologue, we jump ahead to six months later. The Mi’gmaq are in control of a small survivor camp on the reserve that they have created because and this is the kicker, if you are Indigenous, if you have Indigenous blood, you are immune to zombie bites, sure they can still tear you to pieces but a bite won’t turn you.

We meet the tribal sheriff Traylor (Greyeyes) and his family early on and it is this family that have the leadership roles in the camp. The Mi’gmaq are the ruling class in this new society as they once were. With white survivors turning up daily there is a choice that they have to make – Do they let these immigrants in because, the white people in the story literally represent death or the very real possibility of it. Of course this cause issues amongst the group and most notably brothers Joseph (Goodluck) and Lysol (Gordon). Lysol wants only Indigenous in the camp, whilst Joseph thinks that everyone that can be saved, should be saved. Joseph’s thinking is also influenced by the fact his white girlfriend (Scriven) is pregnant with his child. This causes friction throughout the story until a shocking decision turns the film into a survival horror nightmare.

Blood Quantum doesn’t soften its often brutal societal and historical allegories and as George A. Romero proved zombie films provide a great gateway for allegory. Jeff Barnaby gets across the sense of urgency required, manging some shots that literally look like they were made by a studio with an endless budget and although the writing isn’t as good as his direction, I had no problems with it. The acting is decent across the board and there are some very good lines delivered. The film also doesn’t shy away from the gore, despite a lower budget, it comes up with some great gore scenes (a sequence involving a baby is still seared into my mind). Blood Quantum is not a film that comes to play nice with the audience, its message and visuals are there to hit the audience in the face and you know what? I love it. A great little film that proves there is still mileage in the zombie sub-genre.

Blood Quantum is available on Shudder