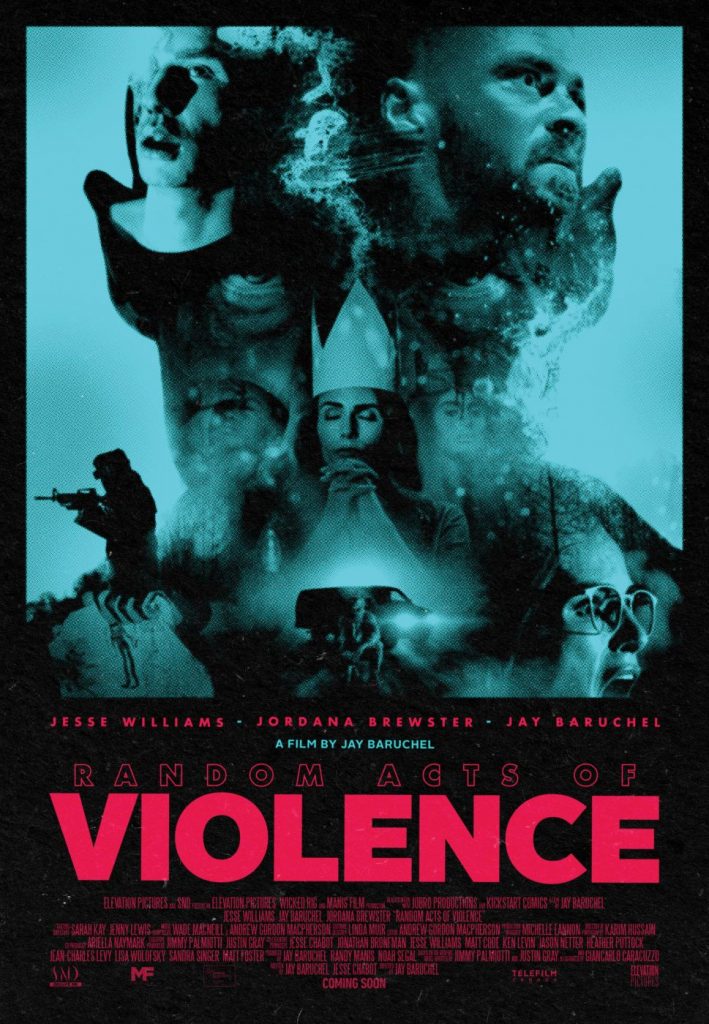 Comic book artist Todd Walkley (Williams) is looking for an ending to his final issue of Slasherman – his controversial and best selling R rated comic book. Along with his girlfriend Kathy (Jordana Brewster), his partner Ezra (Baruchel) and assistant Aurora (Wilson) they go on a roadtrip across America to promote the final issue of Slasherman. However, the Slasherman inspiration is from a series of real murders along the I-90 highway and as they keep travelling it quickly becomes apparent that someone is copying slasherman’s kills…

As with real life controvery and controversial art Todd has his fans and also those that think he is cashing in on various tragedies. A radio host takes him to task for basing Slasherman and making him the anti-hero on a series of real life murders. Todd does struggle with this and with Kathy also involved in a different manner (she wants to concentrate on interviewing the victims of the I-90 murders) the two have conflicting ideals.

Random Acts Of Violence has a little bit to say about violent art being complict in real life violence with the age old does violent art inspire real life violence, however it doesn’t dwell long or go deep on it. The story travels along as you would expect until the story turns suddenly raising the stakes from medium to extreme, sure the story could travelled along a very familar path but kudos to Baruchel and Chabot for pushing this in a different direction. Not having read Justin Gray and Jimmy Palmiotti’s one shot graphic novel, I don’t know if the film follows the book exactly plot wise but I did like the different direction that it went.

When you watch a film about a character called Slasherman, you expect some killings and killings are what you get. Baruchel doesn’t let you off lightly, every killing follows the victim from the start of the murder til the end. A decision that separates itself from the fictional comic, the murders aren’t like the killings in the latter Friday the 13th films and to be squealed or giggled at, and the killer isn’t an anti-hero at all. The murders are harsh, there is no flourish, just straight out brutal violence.

Williams brings an intensity to Todd, looking like he is likely to fly off the handle at any moment, despite his general, kind demeanour. Brewster, Baruchel and Wilson are excellent in their roles, however Baruchel’s and Wilson’s characters are under written but it doesn’t matter too much as they both make up the short comings with charisma.

The film shot beautifully by Cinematographer Karim Hussain, giving it a comic pop whilst balancing it with a real world hue. Burchel directs with good eye for framing and with a good understanding of the film he is making, clearly being a fan of the original material. The writing is solid but a few themes are under developed.

Random Acts Of Violence doesn’t really have a big point to make in the end and perhaps that is the idea. Making it more of a personal crusade with Todd Vs the bad guy. Slasher fans should eat this up, as much as Todd’s devoted followers.

Random Acts Of Violence is available on Shudder (US/UK/Ireland) – August 20.