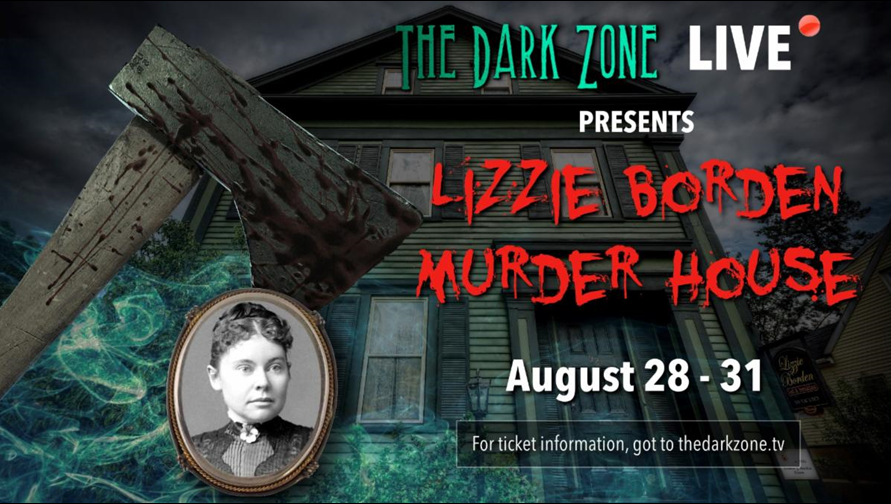 As the world continues to cope with a deadly pandemic, we struggle to find some sense of a ‘new normal’ and ways to combat the boredom of spending all, or a good part of our time at home. In a possible silver lining to the situation, artists and producers have begun to stretch their boundaries to create new and innovative entertainment, and the team at The Dark Zone Network is leading the pack!

It was August 4, 1892 when the hacked-up bodies of Abby and Andrew Borden were discovered in the family home. The number one suspect? Their 32 year-old spinster daughter, Lizzie. Yet, she was brought to trial and acquitted by an all-male jury in unanimous agreement that a woman surely could not be capable of murder!

No one back then could have predicted the worldwide and enduring fascination with this as yet ‘unsolved’ cold case making it the most famous crime in America, second in the entire world only to the infamous Jack the Ripper murders in London, England.

The double murder of Lizzie Borden’s parents, Andrew and Abby seems to have stirred the spirits into great unrest, leaving The Lizzie Borden House perpetually occupied by roaming ghosts which, depending on the individual, frighten and delight guests of the now entitled Lizzie Borden B and B. Could it be the spirits are trying to tell us something? Are they restless because the crime is, to this day, officially unsolved?

“The Lizzie Borden Murder House” will be a 24-hour, 4-day-long live streaming immersive experience investigating not only the crime in search of answers, but also fully investigating the active haunting and anomalous activity of the location. With guests from television psychic Chris Fleming, to real Scotland Yard Homicide Inspector, Colin Taylor, we and our audience will try and get to the bottom of who really committed the evil acts and why the spirits are still so restless in the Borden House. The show will present never before seen evidence and take a closer look at the four other possible suspects. Who knows, maybe the ghosts will tell us whodunit!

The murder house will be set up with multiple cameras providing the audience with a completely immersive experience. Viewers will be an active part of investigations and all the activities that will be employed to connect with the spirits to uncover the truth. Audience members have a bird’s eye view to seances, Ouija board sessions and other live on-scene investigations and paranormal experiments, while adding their own input in the chat room feature. They’ll also be treated to appearances by some of the most well-known and respected luminaries in the paranormal and crime communities who will pop in remotely to share their most bone chilling experiences, analyses and evidence from the brutal murders.

“The Lizzie Borden Murder House” offers a global broadcast which gives our worldwide audience the opportunity to interact with each other and to act as remote ghost hunters and crime solvers. The feed runs 24 hours a day, enabling viewers to monitor multiple cameras looking for strange anomalies and share their potential evidence.

“The Lizzie Borden Murder House” can be viewed exclusively on the world’s first and only paranormal themed OTT platform, The Dark Zone Network (thedarkzone.tv). The Dark Zone Network is a one stop shop for all things paranormal. In addition to being the premiere hub for paranormal themed content, it’s also a community where enthusiasts from all over the world can congregate. DZ is first in the world to provide a global audience with unprecedented real time access.

In these times, it’s more important than ever to stay connected and “The Lizzie Borden Murder House” is an opportunity to join a worldwide paranormal and crime solving community. This is an event you won’t want to miss. The 24-hour, 4-day event runs from August 28th – August 31st. There will be a free preview, Thursday, August 27th at 8pm ET. For full access to the 4-day broadcast, the cost is $19.99.