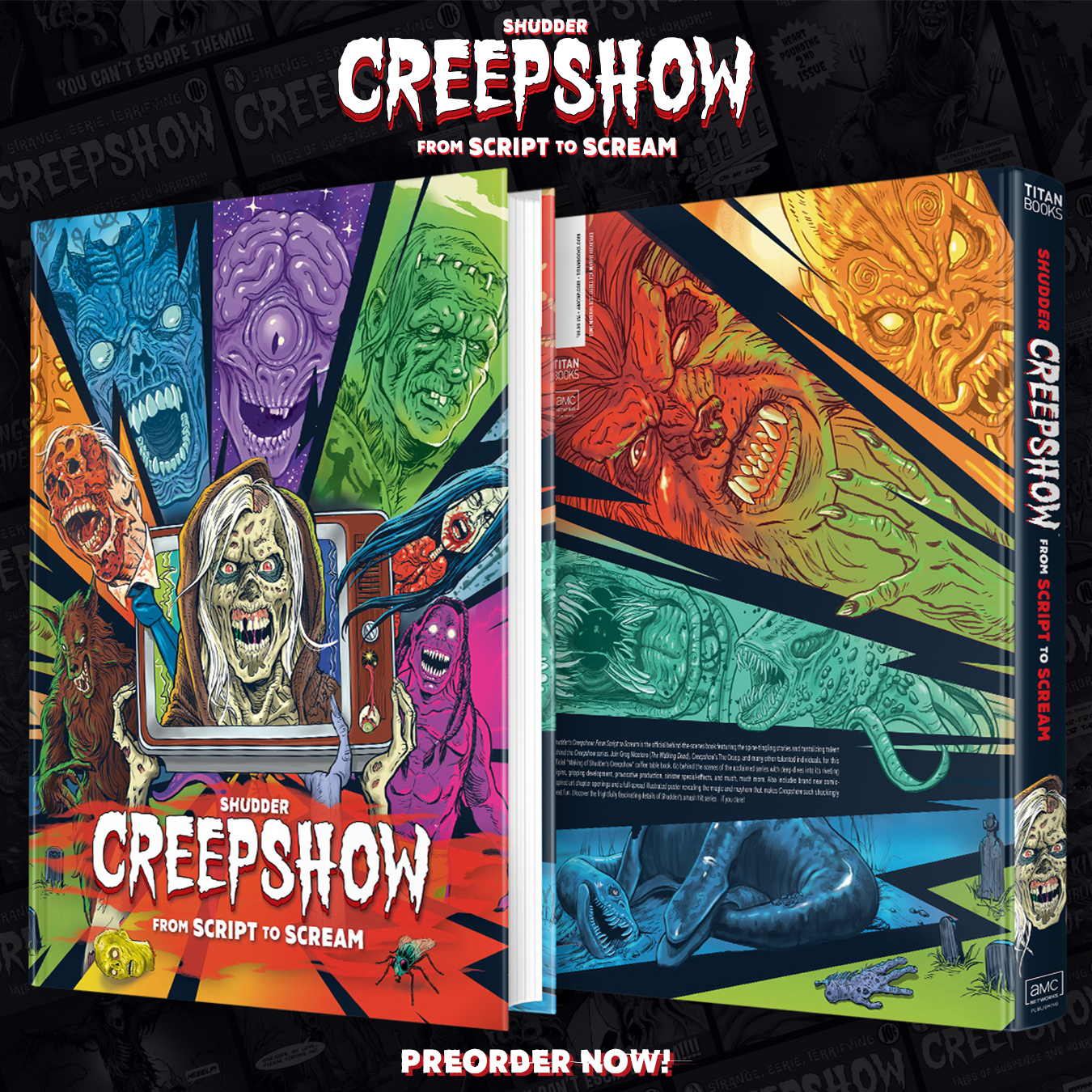 Titan Books is delighted to be partnering with the newly-launched AMC Networks Publishing on Shudder’s Creepshow: From Script to Scream, an official behind-the-scenes book featuring the spine-tingling stories and tantalizing talent behind Creepshow, the hit anthology series from Showrunner Greg Nicotero (The Walking Dead) produced by Cartel Entertainment.

Featuring a foreword by legendary storyteller Stephen King and an afterword by horror aficionado Kirk Hammett, Metallica’s lead guitarist, Creepshow: From Script to Scream will be out October 25, 2022. It was written by Dennis L. Prince, designed by John J. Hill, edited by Meredith Borders, and co-produced by Julia Hobgood. The deal was brokered by Striker Entertainment, a global licensing IP accelerator.

With deep dives into the riveting origins, gripping development, provocative production, and sinister special effects of Creepshow, this is a book that will appeal not only to fans of the show but to any aspiring filmmakers and practical and makeup FX artists, as well as other horror, comics, and film and television fans.

“I grew up wearing down my fingertips paging through books on the making of my favorite movies,” said Nicotero. “I was ravenous to learn the behind-the-scenes secrets. So, I’m excited to be able to present a glimpse behind the making of this epic show!”

The book also features all-new comic art chapter openings and a full-spread illustrated poster revealing the magic and mayhem that makes Creepshow such frightfully great fun. The Standard Edition available everywhere books are sold will feature a brand new cover by Gary Pullin, while the Exclusive Edition available only through AMCNP.com will feature a cover by Sanjulian.

“This jam-packed, behind-the-scenes Creepshow book is perfect for fans of the show, as well as anyone passionate about horror entertainment and aspiring filmmakers and FX artists,” said Mike Zagari, Head of AMC Networks Publishing. “The collaboration between Greg Nicotero, the Creepshow series cast & crew which is overseen by Monster Agency Productions, Stephen King, Kirk Hammett, the George A. Romero Foundation, and many other talented individuals exceeded all expectations!”

Creepshow has been heralded as “an irresistibly macabre package,” (Slant Magazine) and “an undeniable love letter to all generations of horror fans,” (CBR), and over three seasons, has been one of the most watched programs on Shudder. While the book focuses on the television show, it also contains imagery and anecdotes from the original Creepshow film, which celebrates its 40th anniversary this November.

Dennis L. Prince is an accomplished writer and author who, since 1998, has produced a steady output of book-length works and articles on business, technical, and entertainment topics. His lifetime love for movies and television led him to narrow his focus on film, filmmakers, and popular culture. He’s best known for his books, Aurora Monster Scenes: The Most Controversial Toys of a Generation and Joe Alves: Designing JAWS.

Greg Nicotero is an executive producer, director, and special effects makeup supervisor and designer who co- founded The KNB EFX Group, Inc., the longest running effects house in Hollywood. Since 1988, Nicotero and his team have worked on nearly 700 film and television programs including Reservoir Dogs, Spawn, The Mist, Scream, and Sin City. In 2010, he designed zombies for the AMC series The Walking Dead and went on to become the producing director on the hit show. To date, he has directed 33 episodes of the series. His work on The Pacific, The Walking Dead, and Breaking Bad has garnered him nearly a dozen Emmy nominations and four wins. As the zombie epic enters its eleventh season, Nicotero has debuted his new critically acclaimed series Creepshow, an anthology comprised of twelve terrifying tales per season inspired by the original 1982 film of the same name. He is the executive producer and showrunner and directed two segments on season one. He is currently developing and prepping seasons two and three.