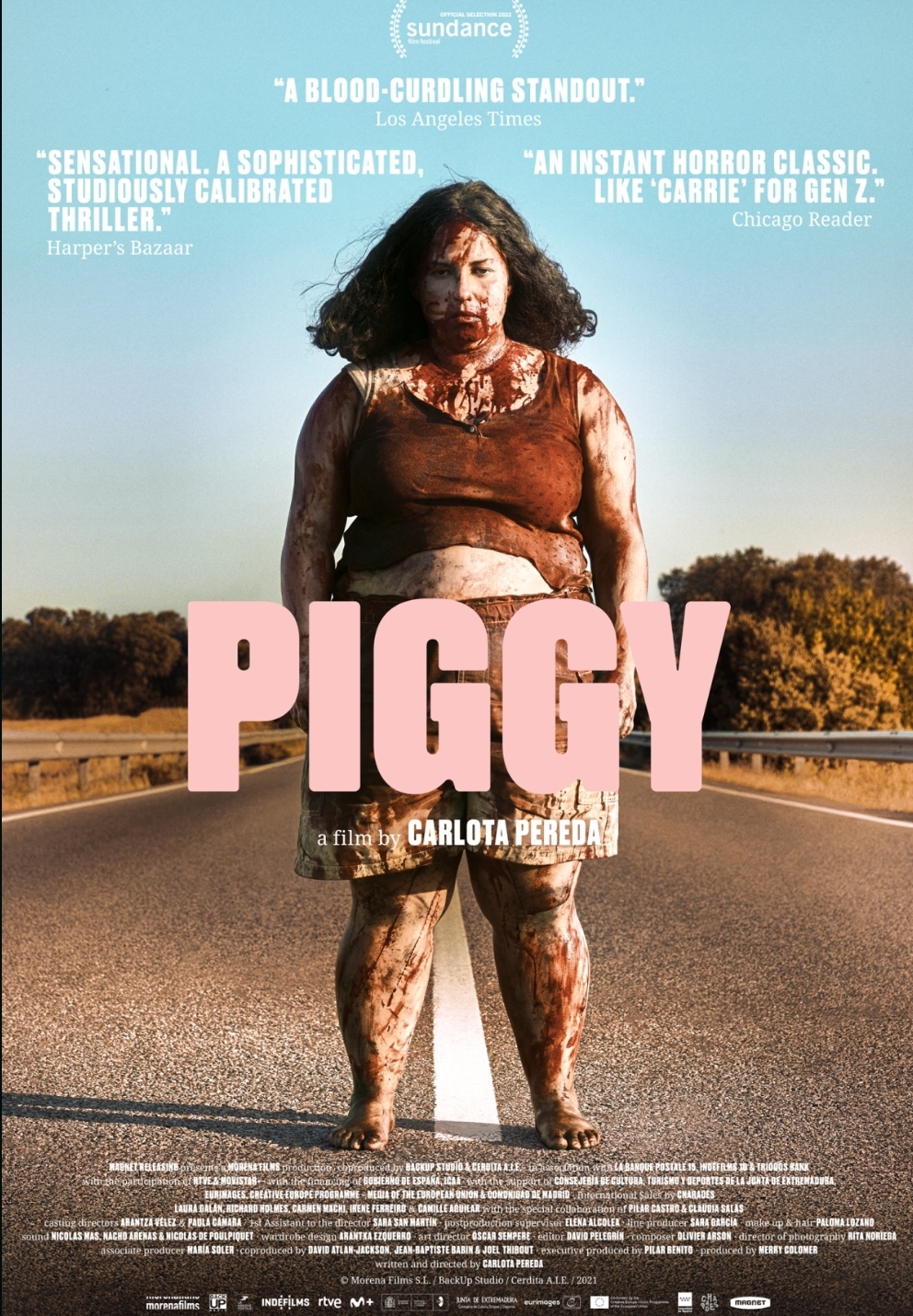 Bullying lends itself to horror in ways that nothing else can. There is such a broad scope of what bullying can contain, from micro aggressions, ugly words in person and online to full on physical abuse and on the flip side it can also explore the victims want for revenge. Piggy explores this and offers some interesting answers.

Teenager Sara (Galán) works at the family butchers shop and when she isn’t doing that she is studying. Sara is teased because of her weight by just about every teenager in the area, cruelly nicknaming her Piggy. Sara gets a chance to go swimming but unfortunately for her, the local bitches have followed her to the pool and steal her clothes. Humiliated, Sara begins the long walk home and after coming across her tormentors being abducted by a rampant serial killer, Sara decides to say nothing after receiving just the tiniest piece of kindness from the serial killer…

Galán is phenomenal. Bringing across the sadness and rage that she feels, the sadness of being picked on for no reason, the rage of being powerless and the combination of the two when interacting with her parents. It’s one of the best performances in recent memory.

The middle third of Piggy does lose some tension and propulsion unfortunately making it lag a little, some tighter scripting may have helped this but it really picks up in the final act making for a very bloody and memorable finish. The other issue is that it does boil the films theme down to a simple should/shouldn’t decision, when these themes could have been explored more, giving more depth to the film. Having said that, clearly the simple messages aren’t getting through, so one could argue the case that we still don’t get it and you’d be hard pressed to dispute that.

The cruelty meted out to Sara is accepted by society as a whole and Sara who is an ambiguous character, one that is not always likable is seen as less because of her body, underestimated and under valued by just about everyone. A societal norm so common it verges on trope.

Writer-Director Pereda – expanding on her short film – makes no apologies about any moral or social quandaries that arise. Is Sara wrong for not telling anyone what she saw? Are the girls getting their karma paid back to them ten-fold? The right thing to do is not necessarily the fair thing to do and Pereda nails this line that the film balances on. Cinematographer Rita Noriega makes us feel the heat, the blazing sun and the sweltering nights almost have beads of sweat forming on the lens.

Despite some small issues, Piggy is still one of the better horror films of 2022, in an already stacked year and it’s very much worth seeking out.