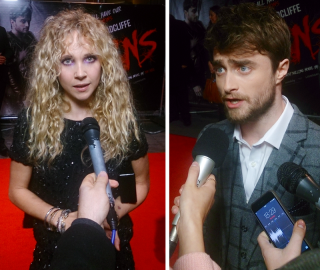 @bloodonthedice graces the red carpet at the UK premiere of Horns…

Filmgoers braved overcast autumn skies on Monday for the UK premiere of Horns in London’s West End to catch a glimpse of stars Daniel Radcliffe and Juno Temple.

Based on Canadian writer Joe Hill’s 2010 novel, Horns is a dark fantasy where Daniel plays Ig Perrish, who stands accused of the brutal murder of his girlfriend, Merrin Williams, (Juno Temple). Awakening one morning, he discovers horns growing out of his head – which may hold the key to finding Merrin’s killer.

Despite the grimness of the plot and the chill in the air, Daniel and Juno were both as charming as ever, warming greeting fans and taking the time to pose for photographs. The pair looked very glamorous despite the weather, with Daniel turned out in a very smart, checked suit and Juno looking beautiful in a floor-length, sparkly dress.

Describing her character, Juno spoke about Merrin’s “angelic qualities” and that, as her appearances in the film take place during flashbacks, Merrin was seen through the filter of Ig’s memories. She also praised the safe environment director Alexandre Aja created through his set which Juno said was “essential for the dark places the film visited.”

Daniel spoke about how he loved the challenge of the role and Ig’s situation – a situation he could only as describe as “insane”. When asked about the film’s racier scenes, he revealed that actors do not get as freaked out by sex scenes as much as fans may think and that while such scenes do not require much in the way of skill, who they work with is important. When asked about what the future may hold, Daniel remained tight-lipped, stating that while things were in the pipeline, he wasn’t able to talk about them.

Horns is released in the UK on Halloween.