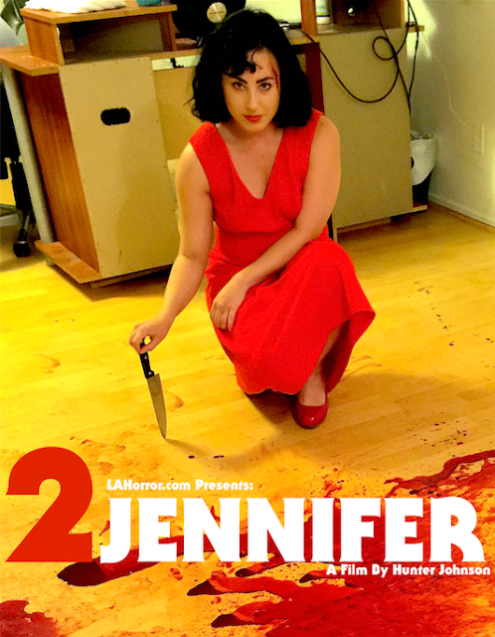 2 Jennifer the follow up to To Jennifer, is a meta experience in the same way that The Human Centipede 2 was a sequel to the first film. In the sequel the first film is established to be just that – a film, whilst the sequel is ‘real life’. With Hunter Johnson taking over the writing and directing from James Cullen Bressack (who serves as executive producer), does this self aware and self-referential film work?

First we meet Spencer (Hunter Johnson) as he is sorting out the details for the production of 2 Jennifer to begin. Basically forcing his friend Mack (David Coupe) into getting days off work to shoot the film and then he flys out to Los Angeles. It is clear from the outset that Spencer is just a little bit off, whether it is an off centre love for film or just his personality in general – it just doesn’t sit right. Once in L.A, Spencer begins his obsessive search for ‘his’ Jennifer. So much so that the casting call for the lead role, contains only female actors whose name is Jennifer. From here Spencer and Mack try to begin their production but not before they meet with James Cullen Bressack…

Like the original film, 2 Jennifer is filmed on an Iphone and also like the first film the idea that someone would record almost every moment seems like a stretch at first until the plans are fully laid out (plus – you know there wouldn’t be a film either). To be brutally honest there is a lot of fluff you have to sit through (to be fair a hell of a lot of other found footage films have the same issue) before 2 Jennifer really starts to kick in, however the wait is well worth it. When the tension gets turned up, it builds to a climax that you can see coming but nothing prepares you for the totally insane last ten minutes.

Hunter Johnson does well in the role of Spencer, layering just enough crazy on to his character to have you wary of him early on. He teeters on the brink of this for the whole film, at times it is comical and at other times it makes you feel very uneasy. David Coupe plays the friendly and loyal Mack, so blinded by his loyalty to Spencer and to the film they are making that he can’t see the forest for the trees. There is also a bunch of scream queens (either burgeoning – Erin Marie Hogan – or fully fledged – Felissa Rose) in the darkly funny audition scene. Lara Jean Mummert plays the titular Jennifer, who is sweet and completely oblivious to as to what she has gotten herself into.
With people utilising what they have – like phone cameras, it seems that anyone with a phone can make a movie, whilst I agree with that they won’t make a good film unless there is passion behind it. 2 Jennifer has clearly had a lot of care taken with it. From the surprisingly well written and thought out script (I don’t mean this as an insult, just a insight that even found footage films can be well written) and all the actors committing 100% to their roles, 2 Jennifer works as a horror film that is horrific without coming off as a cynical exercise. 2 Jennifer might be an unexpected sequel but it is certainly a good one.
L.AHorror.com were kind enough to send us an advance copy of the film.
Ryan Morrissey-Smith
Twitter: @TigersMS78
Images: L.AHorror.com