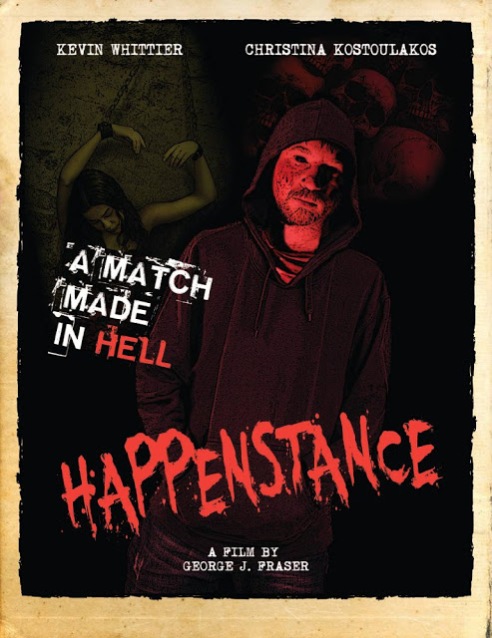 The short films opens on something we have seen many times, a girl panicked and running from something in the woods. Our villain (Whittier) comes into view shortly after, calm and measured like he knows just where she is going and chances are she isn’t getting away. This turns out to be the case and with a swift smack to the head, we arrive in the villian’s hideout. A veritable smorgasbord of horror awaits: Caged girls, body parts and a sicko’s arsenal of devices to cause pain, which inevitably does happen. Fraser handles this portion of the short well, even throwing in a sly nod to the Texas Chain Saw Massacre.

When our killer is out prowling for victims and finds a girl (Kostoulakos) in need of help, you’d be forgiven for thinking you know what comes next. However it doesn’t happen in the way that you think and it is a nice little surprise. In fact things are totally taken places that you would certainly not think of going. That is what is impressive in that in just about 11 minutes, Fraser manages to surprise you but do it with some flair working within a low budget arena, the film is sparse on dialogue and it is through Fraser that the story is told without the needless, padding dialogue. The film is also helped immensely by an excellent score.

With a premise that is twisted on its head, some pretty gnarly lo-fi effects and some inventive film making Happenstance is an interesting short that will hopefully give Fraser a chance at a bigger budget and the chance to sink his teeth into a full length film.