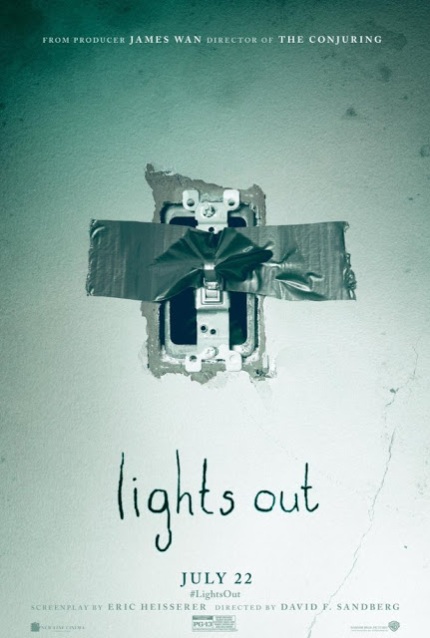 @RenZelen reviews…
Director: David F. Sandberg
Writers: Eric Heisserer (screenplay), (based on the short film by) David F. Sandberg
Starring: Teresa Palmer, Gabriel Bateman, Maria Bello, Alexander DiPersia, Billy Burke, Alicia Vela-Bailey
Review
The James Wan-produced flick Lights Out began as a three-minute short film by David F. Sandberg and the movie version opens with a sequence that replicates the original short. Turning out the lights in a factory after hours, Esther (Lotta Losten) an employee, sees a grotesque female figure that distinctly and menacingly appears in the dim corridor when the lights are switched off, but disappears whenever the lights come on. Here’s a ghoulish monster that is only visible when it’s dark. It proves to be a simple yet frighteningly effective idea.
Lights Out then develops as a conventional ‘child in peril’ story. Schoolboy Martin (Gabriel Bateman), whose father Paul (Billy Burke) was mauled to a pulp by the abovementioned female monster when the lights in his factory went out, is now under the sole care of his damaged mother, Sophie (Maria Bello).
Sophie is loving but neglectful, prone to erratic behaviour and appears to be conversing frequently with a gravelly-voiced and unpleasant entity that prefers to stay in the shadows. Terrified and fearing for his sanity, the sleep-deprived Martin passes out in school and, unable to contact his mother, the school approaches his grown-up half-sister, Rebecca (Teresa Palmer).

Rebecca is a bit of a wild-child, or so we are supposed to surmise from her black attire, the Death Metal posters that hang in her dingy apartment over a Tattoo parlour and the peremptory way she kicks out her nice-guy boyfriend Bret (Alexander DiPersia) after their ‘sexytime’.
However, Rebecca feels protective to little Martin, as she is running away from the same thing – as a young girl, she was never sure of what was real when the lights went out at home. The unnerving entity that is terrorizing her little brother was also known to appear during Rebecca’s childhood. What Rebecca fears, is that her unstable mother Sophie seems to be the link between the malevolent entity and the waking world.
Although director David F Sanberg’s viral video was arresting enough to grab the attention of horror mogul James Wan, the feature length version lacks what made films such as ’Insidious’ and ‘The Conjuring’ so good. Those movies took the time to create characters that we cared about, using sympathetic actors and developing a proper plot.
Unfortunately, Lights Out comes up a bit short on narrative complexity, character development and memorable dialogue. The connection between mother Sophie and the murderous entity seems to hinge on the state of her mental health, which is a rather dubious and possibly controversial device to use in what is really a simple scare-fest flick.
The film doesn’t come up with anything particularly creative, although Sandberg does try to find inventive ways to exploit his premise – a monster that resides in the dark (or a lighted area as long as it stays in deep shadow). He effectively uses a motion-detection timer which cuts out the overhead light, and later on the rhythmic periods of blackout from the blood-red pulse of the neon sign outside Rebecca’s window, to create some moments of real tension.
Sandberg must employ various contrivances to explain why the lights are always going out, flashlights failing, candle flames flickering and when Martin, Rebecca and Bret venture into Sophie’s haunted house, (darkened during daylight hours and featuring unreliable lighting at night) why his characters inevitably fall into the conventional horror tropes.
Lights Out has a certain degree of style— I personally rather enjoyed the sinister ‘creature’ and would have liked to have seen her relationship to Sophie and the family explained in a more inventive and definitive way. It was a pity to see an interesting premise glossed over and ultimately expressed in such a conventional and underwhelming manner. However, there was enough promise in this first feature effort to wonder what Sandberg might be capable of with a better storyline and screenplay.
Ren Zelen
Twitter: @Renzelen
Images: IMDb