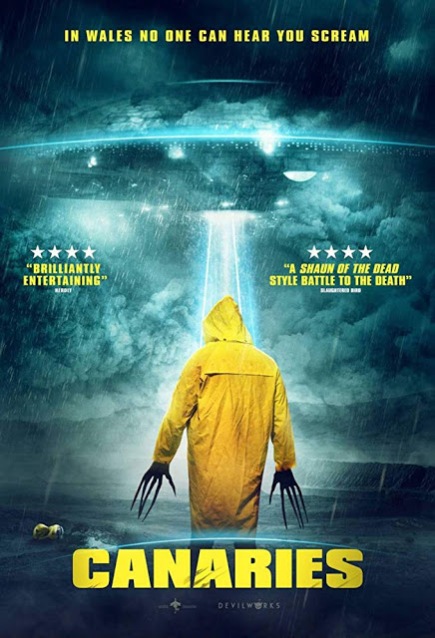 Canaries starts off skipping through previous years 1980, 1996, 2012, 2014 all with one thing in common Alien abductions, only problem is the abductees are turning up dead years later and some are even turning up dead from the future. We get introduced to Steve Dennis a radio DJ that has moved back to Lower Cwmtwrch, Wales and is looking to hold a raging New Years Eve party, unfortunately at the same time the Aliens are about to launch an invasion.

The film straight off the bat shows its ability to flip between Scifi, comedy and back again seamlessly and it easily draws you in. This is no small due to the writing and slightly off beat acting. The writing is smart and low-key and the acting matches it brilliantly, ever character gets to riff with each other and the delivery is spot on.

Like most indie low budgeters, Canaries tries to show just enough without having to give you a full look at the aliens (unfortunately they do, the Aliens are kinda hokey) and whilst some of the effects aren’t great, other gore gags are staged much better and as far as low budget films go there is plenty more to like than dislike.

The film turns from a scifi/comedy into a slasher/comedy film mid way through and it creates some cool moments and gives you a chance to see the some of the better gore effects but the one thing that does remain constant is the comedy which is great because it is this films trump card. It is an ambitious plot with time travelling killer aliens, shadow agencies mixed in amongst a slasher survival film and for the most part it comes off. 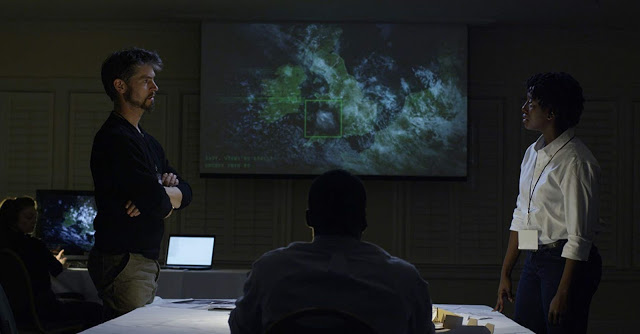 A very well written and sharp script raises this film above where it should land but with a tiny budget Canaries manages to be really entertaining despite these limitations. If true indie horror/sci-fi comedy is your thing, this should scratch that itch.

Canaries will be released by Devilworks (USA).