Assassination Nation is writer/director Sam Levinson’s provocative modern-day spin on the 17th century Salem witch trials. As mob hysteria and mass panic spread through social media, contemporary Salem erupts into murderous violence as the population of the town hunt down four teenage girls, suspected (without proof) of exposing the deepest secrets of their community.

Once the viewer has taken that in, the story continues with a narration from high-schooler Lily Colson, (Odessa Young) describing the events that caused her town to ‘lose its mind’ and set out to hunt down and kill her, along with her three friends: Bex (Hari Nef), Sarah (Suki Waterhouse) and Em (Abra).

Admittedly, none of them are particularly sympathetic characters. While stressing that they’re barely of legal age, they revel in wearing skimpy clothing and the male attention this gives them, while feigning an aura of defiance. They speak in teen-twitter jargon and spend almost every waking hour texting, sexting, snapchatting or Instagramming every event of their lives. It seems that for these teens, hanging out with friends isn’t so much an opportunity for mutual interaction as a support group for parallel phone use.

However, they all have secrets. Teenage Lily is secretly ‘cheating’ on her volatile boyfriend Mark (Bill Skarsgård) by sexting and sending provocative pictures to an older, married man who she refers to as “Daddy”. Meanwhile, at parties, Lily, Bex, Sarah and Em try to convey assurance and confidence beyond their years, grinding on the dance floor to get attention. Levinson splits the screen into three panels, (in the shape of Snapchat windows) to imply that this is a performance.

The girls, barely 18, take drugs, have casual sex and flaunt their bodies (Levinson here rather having his cake and then denying it). However, what is never made public is the shame and tears that follow in the wake of the events of the night.

The aura of cynicism the teens cultivate provokes a tirade from Lily when concerned Principal Turrell (Colman Domingo) challenges her about a piece of pornographic art she has produced for a class. She launches into a justification of the drawing, citing it as an expression of how hard it is for women to be natural when faced with the misogynistic environment of selfie-obsessed social media. “It’s not about the nudity,” she explains, “It’s about the thousands of naked selfies you took to get just one right.”

Considering that her argument is not without foundation, the compassionate Principal Turrell lets her off with a warning. However, the truly toxic nature of social media is unleashed when the town’s Mayor Bartlett (Cullen Moss) becomes the victim of a hacker. His most shameful secrets are posted online and shared with the entire Salem community. This is the start of a string of events which have increasingly bloody consequences.

The next victim of the hacker is Lily’s own high-school Principal who is then hounded by the townspeople for taking pictures of his six-year-old daughter in the bathtub. He attempts to reason with a baying crowd that has labelled him a ‘pervert’ and has no intention of listening to anything he has to say.

Real panic sets in when scores of ordinary citizens suddenly find their text messages and private pictures shared with everyone in town. When their hypocrisy is in danger of being exposed, the citizenry turn very nasty indeed, working themselves up into a vengeful murderous rage.

When her married “Daddy’s” texts and photos are also revealed, Lily’s secrets are exposed to scrutiny and she becomes the target of parental and misogynistic hatred. As events accumulate and the town descends into lawlessness and chaos, one teen boy reveals under torture that he has traced much of the hacker activity as coming from Lily’s house.

The citizens of Salem, all ‘good people’ as they call themselves, fuelled by indignation and thirsting for blame and blood, go looking for Lily and her teenage friends. These four shallow teens, living comfortably in a middle-class suburb, now find themselves the target of mob violence. The whole town, as Lily stated in her opening voiceover, wants them dead. 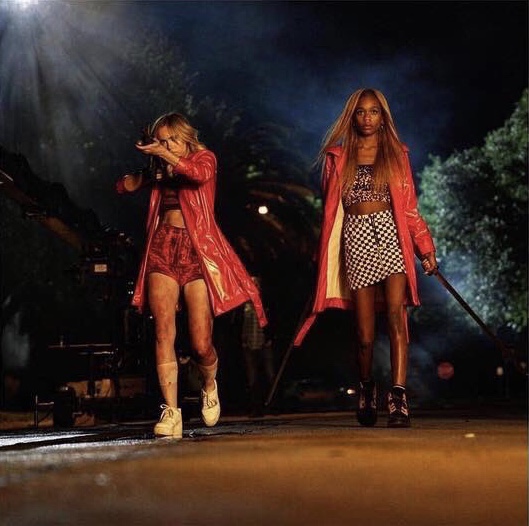 Assassination Nation offers a compelling examination of contemporary mass hysteria and online mob harassment, but it doesn’t really mock or challenge the social mores it presents, so one hesitates in defining it as a satire. It’s brutal in showing how girls are expected conform to certain stereotypes but are then punished by society for doing so.

Hatred of women pervades the film and we see how certain men can lash out violently when their dominance and masculinity is threatened by women or any kind of gender fluidity. But, I would also hesitate in calling Assassination Nation a feminist film, although I suspect that it would like to see itself as subversive, at least.

As an American film about teen nihilism it is in interesting contrast to a French film at the LFF dealing with the same subject – School’s Out shows French teens dealing with their cultural and moral crisis in a more enigmatic and intellectual fashion. By contrast, Assassination Nation is not subtle. It is ‘in your face’- all guns blazing in a flurry of spectacle and shallow buzzwords. Nothing enigmatic here, but (somewhat like the French film) there isn’t much of a coherent thesis either.

Assassination Nation touches on serious topics but never in any real depth and sidesteps exploration of moral grey areas. To be honest, it seems that when adults try to analyse or understand the complex issues facing contemporary teens nowadays, they may be sympathetic, but remain rather at a loss.

Reviewed as part of the London Film Festival