Well where do you start with Bill Moseley? An actor that has one hundred and twenty plus acting credits to his name, a musician, a man who has played some of horror’s most loved characters and is a super friendly, smart guy to boot. I was lucky enough to get some time with Bill, to talk about his latest film, the much anticipated 3 From Hell. I started off by asking him about what it felt like to be back playing the role of Otis B. Driftwood…

RMS: It’s been a long time since you played Otis, was it difficult to get back into that character after such a long time?

BM: It was at first, that’s a long time between Otis’ – 14 years. There was a lot of pressure to try to certainly do justice to Otis, from the The Devil’s Rejects and as well to evolve Otis 14 years later after presumably a rough time in prison (laughs). There was a lot on my plate and I do remember doing a scene on day one or day two and dropping some lines and having a little bit of a moment. So I took a time out and sat down and took a deep breath, and then I heard a voice in my head say ‘Get outta the way Bill, I got this’ – it was basically Otis, telling the insecure Hollywood actor, no need to worry about what is your better side or the lines or hitting the marks, these things are important by the way but basically get out of the way of those insecurities and I did and Otis kicked in and did a good job the rest of the way.

RMS: I have to agree. This is the only character that you’ve reprised is that correct?

BM: Yes, pretty much so. I did do a second pass at Chop Top for Tobe Hooper’s son, Tony’s All American Massacre, it never saw the light of day but at least I got a chance to play Chop Top again with a bigger plate in my head this time! This was ten years later as well so it more was exposed. But Otis is the only character I have reprised. 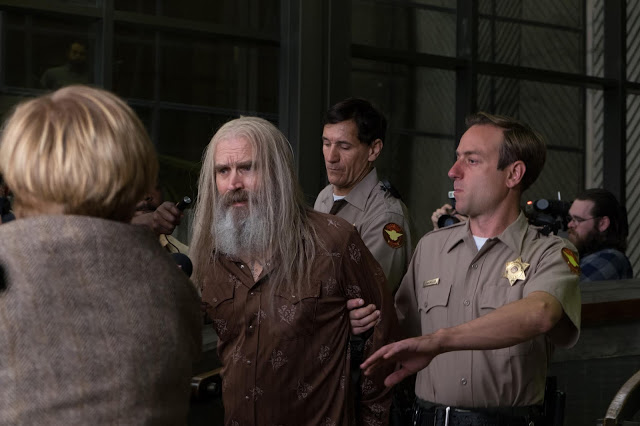 RMS: I thought that it was an interesting portrayal with Otis, a complete psycho but he is very family orientated, which is a theme carried through from House of 1000 Corpses.

BM: Yeah, Otis is a blink of an eye from total insanity. But in 3 From Hell there are some moments that could almost qualify as introspection (laughs), you know where he is thinking about mortality I guess, his and others and about Baby and there are a few little moments like that, they’re kind of glimmers and then they are gone because Otis is a man about being in the now and lives to get fucked up and basically do bad things to bad people and bad things to good people.

RMS: With Richard Brake joining the crew, you and him had a real connection on-screen. Did you know each other off screen prior to this?

BM: We did not. I had never met Richard, I’d certainly seen him as Doom-Head in 31 but I had not met him. Richard, I think I met him on set, so there was no prior connection but he had seen House Of 1000 Corpses and The Devil’s Rejects and I had seen 31 so we knew each others work and there was respect there. I had my doubts, you know, who is this guy and is this gonna work? He is joining the family and he wasn’t just another random character but it worked out just great. From the minute I met him, I got along and we had a connection just as two human beings. Working with him on-screen is a hoot. When he got going with his long, strange improvisations (laughs) about Mr Salami and what he was going to do to the Bounty Hunter, who actually was played by my real life wife (Lucinda Jenney).

BM: Yeah, and it was really fun to stand off screen and watch her deal with Richard, cause I think a lot of the things she was saying like ‘Shoot him, shoot him!’ that was not in the script, so that was actually a lot of fun.(laughs)

RMS: That was pretty crazy.

BM: And then I come in and tell her that she doesn’t wanna know what I am planning to do to her, which really was a lot of fun.

RMS: That kind of answers the next question, with all the horrible things happening on screen, it seems like it was fun off screen. Is that something that Rob Zombie does to keep things light off screen or is it more up to the actors to keep things a little less intense?

BM: No, I think we’ve all done this enough, so we are all very much professionals. With Rob and having worked with him as much as I have, it is pretty cut and dried in terms of we know each other and we speak and communicate in short hard and he writes these great scripts and it is helpful in general that he is the writer as well as the director and he isn’t trying to translate someone else’s work, these ideas were cooked up between his ears and he is a lot of fun to work with. He is very steady and knows how to communicate what he wants and very patient to get what he wants but he is also open for collaboration so if you have a good idea or something funny to say to or to add to what he wrote a little differently he is OK with it – as long as it works. That is what I like to do, I love collaborating. A couple of scenes with Richard, we just basically just jumped the guard rails (laughs) and got into some pretty funny territory, that Rob was laughing his butt off at. It ends up being a very happy set. Rob and Sheri are vegan – I’m not – so craft service is vegan and that takes a little bit getting used to but my younger daughter is and my older daughter’s vegetarian, I just found out, so you know I am here in West Virginia right now and I enjoyed a dinner of pulled pork, baked beans and coleslaw so that is where I still am – maybe one day I will evolve at some point but not today.(Laughing)

RMS: That sounds delicious! Just going away from 3 From Hell, you’ve had some iconic lines in past films, do you get that quoted back at you at Horror cons or just randomly yelled at you in the street?

BM: Not so much in the street because people do not recognise me but I do a lot of it at horror conventions. People really wanna hear the lines, sometimes they use the lines they want me to say because they don’t believe I am that same guy, even though I am sitting at a table with a bunch pictures of me in my different movies and a banner behind me and they look at me and they say ‘When is he gonna show up?’ And I say – It’s me! – Hello! (laughs) But I do it a bit, people wanna hear “Dog will hunt’ or ‘Get that bitch! or ‘Lick my plate, you dog dick!’ or they want a bit of Otis “I am the devil and I am here to do the devils work’ and they like ‘Run Rabbit!’ and even ‘I’m coming to get you, Barbara!’ but you know, I’m ready for it all. But I am fan as well and I really love the enthusiasm of horror fans, they love this stuff and I love it too.

RMS: We’ve been told our time is up, so thanks so much for doing this.

BM: Absolutely. It’s been nice talking to you.

Tickets for the September 16th/17th/18th nationwide release of 3 FROM HELL are available at FathomEvents.com/3FromHell. You can read our review of 3 From Hell closer to the release date.
Image: IMDb