Queerness is an integral part of horror’s tapestry and has been throughout the genre’s histories in both literature and film. It’s only natural considering the genre is where we bear witness to our anxieties and re-consume them. And, though LGBT themes in horror often appeared coded in the past, like in the case of Universal’s take on Frankenstein, for example, significant progress has been made to more directly engage with these issues, especially in the last decade. The Final Girls Berlin Film Festival explored and celebrated this diversity in genre filmmaking and storytelling with this past year’s Queer Horror shorts block, featuring six films with distinct styles that were sometimes unflinching in their pathos, and sometimes concerned with turning the madness and bloodletting up to 11. 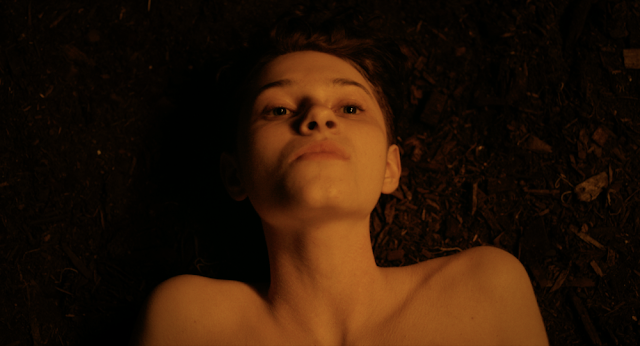 Skin, Dir. Audry Rosenberg.
Skin tells the story of Charlie, a teenager who feels uncomfortable in their own body and has trouble navigating through interactions with other people because of it. This short could be called a slow-burn, though meditative seems a better description. Rosenberg does not crowd the film’s 20 minute or so runtime with unnecessary exposition, and while the dialogue is sparse, it is always impactful. There is great nuance to the cast’s performance in this respect, especially in the case of our lead. Charlie is played by trans actor, Rhys Fehrenbacher, with a profound vulnerability and doleful desperation. It is this powerhouse performance that maintains the balance between the melancholy and hopefulness that is Skin’s emotional core during the film’s more magical realistic finale.

Labrys, Dir. BJ Colangelo.
This short seems a nice companion to Skin, with its fantastical elements and happy ending, though Labrys is certainly more bombastic than the previously discussed short. Leenie and Jill are on their first date after meeting online, and things are going well, even after a rude man tries to ruin their evening with his toxic masculinity. However, as the two part for the night, the man returns and attacks Leenie, prompting Jill to make a stand and reveal a hidden power. Labrys is tight production with a number of big ideas and issues driving the narrative that are handled with finesse by BJ Colangelo, who has been a treasured voice in the horror community. I especially appreciated Leenie and Jill’s blooming relationship. They are warm, relatable characters who have a connection that is incredibly sweet and honest, despite having only just met in person. This film has a white hot streak of hope thanks to several empowering moments such as when Jill accepts and uses her power to protect Leenie from familiar prejudice and when Leenie accepts Jill for who she is. 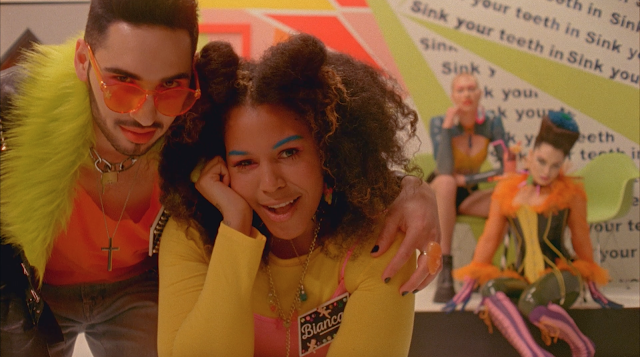 Blood Orange, Dir. Aliya Haq
Angela is stuck in a town she hates but thinks her hip new job at a juice bar will help her reinvent herself and move on to bigger and better places and things. But, things are not what they seem at this juice bar. Something sinister is lurking underneath all that neon! My initial reaction as Blood Orange began was that I loved the film’s campy, retro design and tone. Upon further research, I discovered that this short was shot on Super 16mm, which explains the vintage visual atmosphere and almost sickening deepness of the film’s neon colors. There’s a kind of artificialness or insincerity to the aesthetic that works wonderfully with the film’s cast of characters, who are vapid, deeply unlikeable people, save for Angela’s ignored and disregarded best friend. The queerness of the film’s antagonists is performative and an exaggeration or falsehood that masks the evil beneath, which is eventually released in the bloodiest of onslaughts, suggesting that Angela allowed herself to be deceived because these people surrounding her acted in ways she thought she was supposed to act instead of being herself. In the end, it was her downfall, just as it always is in real life.

Tea Parties Are For Babies, Dir. Teja LoBreglio
Down the rabbit hole, we go. Emily is a quiet and lonely young woman who runs into an old classmate Bunny one day in the park. Bunny convinces Emily to accompany her on a night of fun that would have been cute had it ended when the two women kissed. But, Bunny’s friends are just dying to meet Emily. I think any viewer of this short will know from the start that Emily is in trouble once she meets Bunny because it is simply too good to be true, and that sinking feeling of dread is possibly the worst, and most relatable, feeling that comes across here. We have all been there. In that respect, Tea Parties makes great use of the horror genre’s unique ability to explore our anxieties, though I wish there were a little more meat on this bone, as it were. Even though there is a feeling of dread throughout, I wish the actual danger of Emily’s situation were fleshed out just a tad more to make the ending more impactful and more immediately depressing for viewers.

Destruction Makes the World Burn Brighter, Dir. Kalen Artinian
A woman goes to great, even unspeakable lengths to care for her sick partner in a nightmarish dystopia of industrial pollution finally gone wild. The idea of how far one will go for someone they love is certainly not a new concept, but the bleak nature of this world, built on the foundation of a raw visuals and a wordless script, and the resolution to the question “how far would you go” allows this piece to standout from others with similar themes. 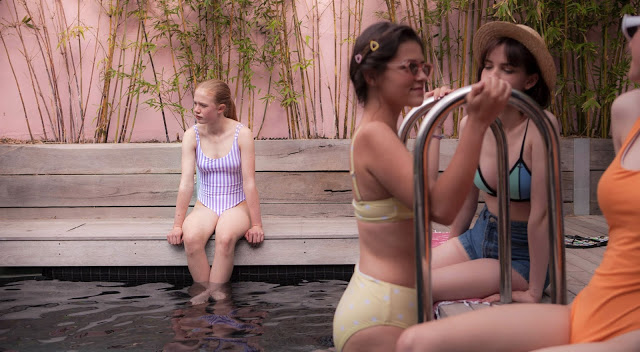 Lone Wolf, Dir. January Jones
Sam attends a sleepover, determined to fit in with her new friends, but finds it difficult considering she may have a crush on Willow, and Blair won’t stop picking on her. And, as the night goes on, it becomes clear that a transformation is happening inside Sam; a transformation she won’t be able to keep hidden for long. Lone Wolf is a deceivingly simple coming-of-age story that directly deals with the apprehensions of young people, and the anxieties inspired by their changing bodies, which perfectly captures the capability of queerness in horror most successfully in this shorts program. Sam’s struggles are handled with great charm, as is the fallout of her ultimate transformation, which is easily the most recognizable and gentle portrayal of queer awakening in a horror film I have seen in a long while.