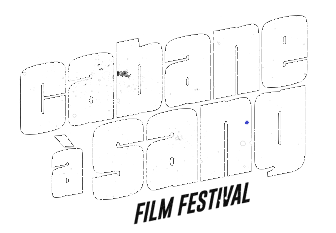 Cabane à Sang (the Blood Shed) film festival is back for ROUND TWO, with films even greasier than a double cheeseburger made with pizzas for buns!

The festival would like to specify that they are not to be held responsible of the damages caused by the drinking game invented by its viewers, which they based on the interventions of the host throughout the night.

Sponsored by Sploosh Juice, this fest promises to deliver the juicy goods when it comes to films, as well as during the hosted segments. The success of the first event was made very clear as the 8000 viewers (cumulative), would plaster the live chat with cheeseburger emojis to show their love for the greasy flicks. The ambiance was “lit AF” as the audience created drinking games where they would drink every time the host said “Motherfuckin” live on the air. Some of them even admitted that due to the game, they were wasted before the first hour of the stream was done!

Saturday April 18th, Cabane à Sang (The Blood Shed), will be back on air, live streaming from their anti-coronavirus containment shelter with a roster of films just as greasy as the first night. Frank Appache will be back on the air at 7PM (EST) to host a variety wide variety of horror and trashy film. Featuring films from this era, hosted in a style resembling MTV from 20 years ago, captured on 40 year old cameras.

Named “The Quebec prince of Trash” by Horreur.Quebec, Frank Appache is back alongside Martin Richard for a second year in a row with Cabane a Sang (Blood Shed). The fest was born from the Road-Cinema that toured the province of Quebec, promoting locally made genre cinema of feature and short lengths. The hype surrounding these types of greasy events made it clear there was a big gaping hole in the film scene and these two film buffs are more than happy to fill it.