Well Fannibals, it’s been an exceptionally long wait and we weren’t even sure if we would have the pleasure of a third season, but after much anticipation, Hannibal Lecter graced our television screens once again and it was glorious.

After the emotional juggernaut that was the second season finale, we have been left with a wounded Will Graham, Jack Crawford and Alana Bloom, but Hannibal ain’t got time for that. He’s living it up in the city of lights with his new bride Bedelia.

After a super sexy motorcycle ride, Dr. Lecter enters a party where he is, clearly, looking for his next meal. In a nod to the light flares that signal Will Graham entering the mind of a murderer, they used some similar flashes to signal that we were being made privy to Hannibal’s hunting mentality. After Mr. Dimmond setting his sights on Hannibal, it becomes immediately clear that Hannibal is wondering how the amount of champagne Mr. Dimmond is drinking will affect his flavor, but we have other liver’s to fry tonight. Has the word “bonsoir” ever been so charming, sexy and malicious all at once and has cannibalism ever looked so damn delicious and sultry? Welcome back Hannibal, your singularly decadent, gorgeous and intelligent take on horror has been sorely missed.

Knowing we would not be satisfied without some mention of Hannibal’s past sins, we were treated to some wickedly amusing flashback scenes with the always delightful Abel Gideon. Played by Eddie Izzard, he is the only psychopath who matches Hannibal in both intelligence and wit. I kind of wish they could have their own cooking show. We could tune in every week and watch Hannibal slowly consume Abel. Working up to the brain scene would be the most delicious kind of suspense and a wonderful celebration of the brain eating scene in the book. 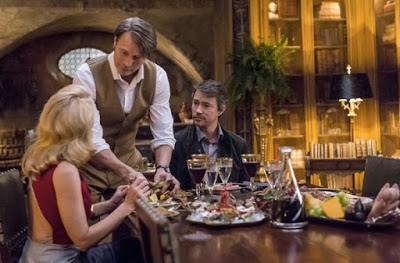 The gorgeous Gillian Anderson is always a lovely sight, but it does feel as though she’s simply playing her character from The Fall, but without the accent. Of course, Bedelia is missing the sexual proclivities of Stella Gibson in The Fall, but they’re both icy blondes with an uncanny ability to control their emotions and reactions. It begins to become clear that Beledia is with Hannibal because she is terrified of him and not because she is a blushing, new bride. After learning how they ended up on the plane together, we finally get to see a bit of Bedelia’s backstory. We are only shown her covered in blood next to her dead patient and Hannibal walking in on it, but it felt very reminiscent of Will Graham and Garret Jacob Hobbs. It is this Fannibal’s early theory that Bedelia was an early experiment of Hannibal’s who did not take well to his brand of mental persuasion. She turned out not to be the killer he had hoped for, but she is now, for better or worse, tied to him. That is until she eats enough acorns, oysters and marsala to meet Hannibal’s specific palette. Uncomfortably aware of this, Bedelia seems to be on a mission of her own. As she walks the stunning streets of Florence in her impossibly chic clothes, she ensures that she is seen on CCTV. Does she know that she is being watched or does she just hope to leave an exceeding obvious trail when she turns up missing?

Never one to miss a beat, Hannibal seems to be addressing this very behavior during his Dante lecture. Just as in the novel, Hannibal is lecturing on the Divine Comedy, but he is also lecturing Bedelia. When he quotes, “I made my own home be my gallows,” he is looking directly at her and her terror is palpable.

Well, Mr. Dimmond, you were cute, but you were no match for Hannibal and the swiftness with which he took you out was impressive. One has to wonder when Hannibal finds time to be a world class athlete in addition to speaking numerous languages, getting bespoke suits made and perfecting his exquisite culinary skills.

Titled Antipasto, this first course had a dreamlike quality and it answered a multitude of questions while also bringing up many more. If revisiting the first two seasons in preparation for this new one has reminded me of anything, it’s that the writers on Hannibal know exactly what they are doing and I cannot wait to both observe and participate in anything and everything they have in store for us.

They broke the fourth wall with the words, “Once upon a time.” What is the level of meaning in this?

Now that Hannibal has taken off his person suit, he should just remain clothes free. Forever. Please.

Raise your hand if you want to be invited to “that kind of party” with Hannibal and Bedelia.

Abel points out that Hannibal would rather be dining with Will Graham and that moment cannot come soon enough.

Yes, that was Zachary Quinto on the floor of Bedelia’s office.

We know that Francis Dolarhyde will appear this season and Mr. Fuller has been publicly adamant about not using sex and violence together. This shall be interesting.