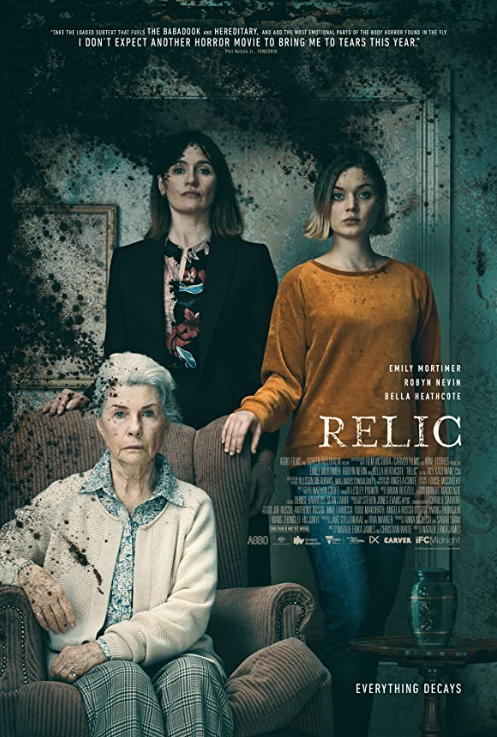 Living out her twilight years in a picturesque farmhouse, Edna appears to be a woman who has lived a full life. Friendly with her nearest neighbor, they haven’t seen her in a week and this causes concern, so they call her daughter Kay. Kay and her daughter Sam make the trip together to look for Edna and help sort out anything that needs to be taken care of. While Kay (Emily Mortimer) seems to be a bit put out of her busy life to do a welfare check on her mom, Sam (Bella Heathcote) is in a more fluid place in life and is happy to come search for her grandmother, but as three generations of women come together in this isolated home, another sinister force is there with them as well.

It quickly becomes clear that Edna (Robyn Nevin) is beginning to succumb to dementia. She has started forgetting things, forgetting people and having minor violent episodes. As Kay looks at care options for Edna, she also struggles with her guilt over not having been with her mother while the disease began to take hold and though Sam volunteers to move in with Edna, she soon learns that caring for someone with dementia is trickier than she might have initially thought. While all of these complex family issues, both said and unsaid, play out amongst the three women, there is also a dark presence in the home: slowly creeping up the walls like a black mold and lurking in the shadows, it brings even more chaos and stress to the women.

Relic employs a slow, steady pace that allows this black, intangible entity to creep through the house and create suspicion, confusion and fear before trying to consume the family entirely. Director Natalie Erika James has crafted a film that successfully places a family history of dementia into a single home over the course of a few days. There is a melancholy claustrophobia hanging over every interaction as Kay grapples with what the best course of care is for her mother, but also how to help guide her adult daughter to a successful future. There is a lot of female familial resentment and love happening which distracts the women just enough to not realize that the house is closing in on them in very tangible ways.

One of the writers on the film as well, James has used some inventive ways to allow the women to physically fight Edna’s dementia and the overall atmosphere of the film keeps the viewer grounded in a constant feeling of despair. Conversely, it can also leave the viewer with mild confusion. For some, Relic may seem like a haunted house movie that never really lands, but looks gorgeous and that’s the main downfall of the film. There is a lot of debate that can go on over whether or not a film has failed if it hasn’t hit you over the head with it’s intended purpose. If you don’t “get” it, then that’s on you, but that kind of thinking is so snooty and also expects the viewer to do the job of the filmmakers.

Ultimately, Relic can be viewed as a slow burn haunted house film with a confounding conclusion or, and I do hope this is the audience it finds, it can be a therapeutic and cathartic film for viewers who have loved ones suffering from dementia. The ending especially is so beautifully done that it’s a shame the overall story isn’t a bit more obvious.