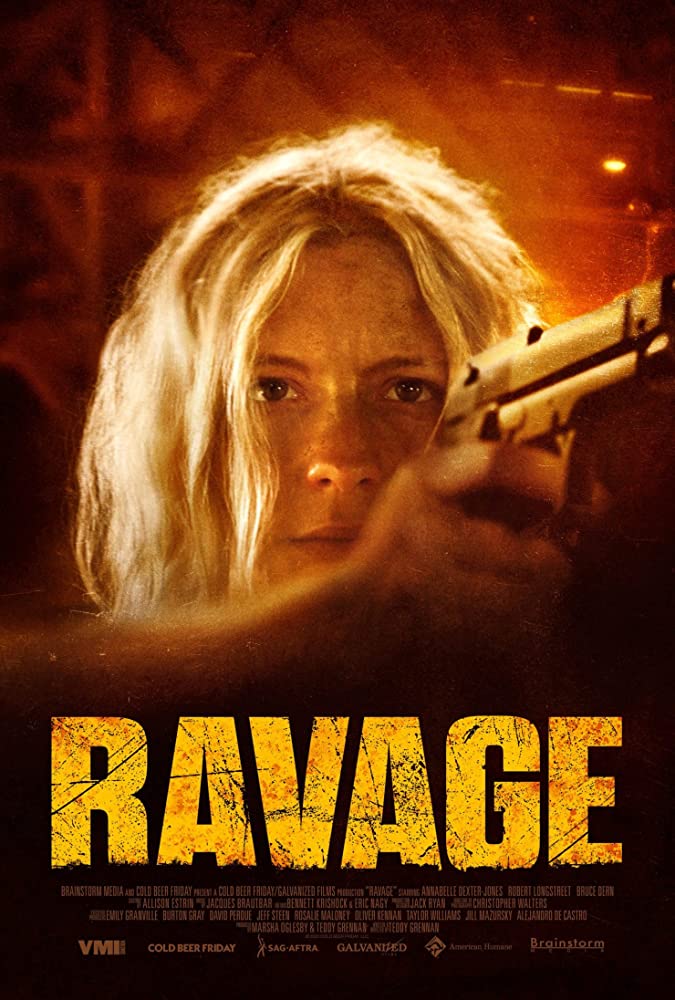 Who doesn’t love a good revenge film? Emphasis on good. Revenge films are ubiquitous and are often times accompanied by their ugly bedfellow rape. At a glance, Ravage could easily be mistaken for yet another rape/revenge film: there is a woman alone in the backwoods of the south and a group of violent rednecks who have decided that they live by their own law and while stereotypes abound, our Final Girl is refreshingly believable, the main villain is uncomfortably charismatic and the cinematography is a love letter to the area.

First and foremost, Ravage should not be considered a rape/revenge film. Rape does occur, but you never see it. Not even kind of. It is alluded to and spoken of, but we are never subjected to it and it’s not the catalyst for everything that comes after and this is what elevates Ravage from being exploitative crap. There is no male gaze of our female protagonist, no underestimating her simply because she’s a female and no suggestion that she may have had all of this coming. It is never in question that the men in this film are straight up human garbage and every death is deserved.

Harper Sykes (Annabelle Dexter-Jones) is a nature photographer looking for a specific breed of bird. Her background immediately signals her as someone with the skills to survive in the wild, or as Ravener, the leader of the rednecks, calls her, “a real G.I. Jane, the real deal.”  Dexter-Jones is a standout. She is a happy soul who happens to see something she shouldn’t have and after taking her photographic evidence to the local sheriff, she finds herself in the hands of Ravener’s gang. Initially, she tries to graciously leave the situation, but after it is made clear that this isn’t an option, that is when she kicks into survival mode. This is the kind of believability that makes you invest in and identify with the character. Her resourcefulness and ingenuity in creating various traps for the men hunting her is both fun and realistic. Of course, this is a movie so the deaths become increasingly gruesome, but nothing is ever gory for the sake of shock. There is also a fun cameo from Bruce Dern that gives Harper a much needed break and helps explain the “logic” that these men are working off of.

The first feature film from writer/director Teddy Grennan, you can definitely see and feel other influences, but Grennan manages to make the film his own. Hi-lighting the beauty of the woods that Harper is trying to escape from, the film is lovingly shot in a warm golden glow and the music is used in clever ways to help amp up the tension or lull you into a false sense of security. Any clunky plotting is easily overlooked because Harper is just so damn cool and you can’t take your eyes off of the way Grennan has put a sheen of beauty on top of truly ugly violence.

Everything is leading up to the ultimate face off between Harper and Ravener. Played by Robert Longstreet (Doctor Sleep), Ravener is a real piece of work. Convinced that he is doing right by the land he and generations of his family have been raised on, it’s hard not to see some potential political commentary on the state of our country. Longstreet is exceedingly good at playing really nasty motherfuckers and there are moments where you almost see his side of things. Almost. Watching these two try to take one another out is nail biting despite knowing that Harper will survive (the movie begins with her retelling her story to a detective) and the final  moments would make Hannibal proud.

Ravage is a gem in a horror landscape ruined by COVID-19 and Grennan has officially announced himself as a director to keep up with.

*be sure to stay through the end of the credits

Ravage opens at select drive-ins on August 14 and on VOD August 21 (USA).