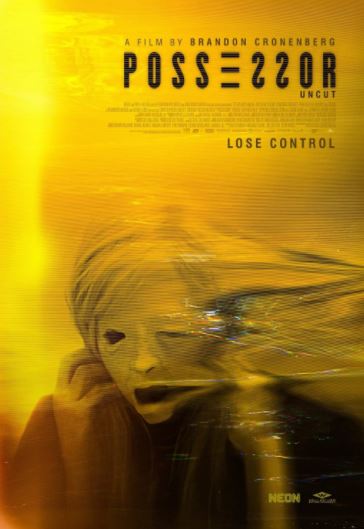 With Brandon Cronenberg’s second feature, it is very clear that body and tech predilections apple doesn’t fall far from the tree. Assassinations have gone corporate albeit still clandestine. Using brain implantation, the company overtakes people that are close to their target, using their body to commit the murder. Things start going awry when the hosts person fights against the ‘possessor’ and their minds battle within the one body.

The way the internal battle is filmed is one of the most striking moments in film in years and throughout the film the images are striking but also shocking, gory and fantastical. Of course none of the images would matter if the film wasn’t intriguing and if the actors didn’t fully commit. Andrea Riseborough, Christopher Abbott are excellent along with Jennifer Jason Leigh and Sean Bean.

Cronenberg has created a really intriguing and exceedingly dark tale, that can be interpreted in many ways and my personal thoughts are spoiler filled so I won’t go into it here. However, I think the best films have multiple ways of connecting with audiences and individual interpretation is just one of those ways. A film that may not hot for some, but for those that love their scifi and horror infused this film will end up being one of your favourites of this year. It was clear with Antiviral that Brandon Cronenberg had oodles of talent, Possessor further solidifies that view but also that he is confident enough to carve out his own path.