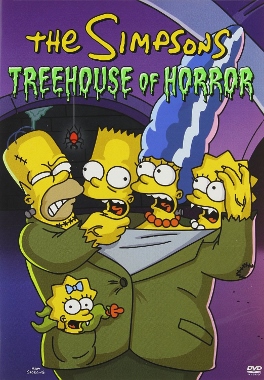 One of the best things about this time of year is The Simpsons Treehouse Of Horror specials. The Simpsons has been running for such a long, long time and whilst the show has some great, good and not so good episodes, the Halloween specials have been of a high standard all the way through. So there is no better time than to list off the twelve best stories from the Treehouse of Horror. I’m not talking entire episodes but just select stories or segments that are the cream of the crop. Also if you think that more of this list is based in the earlier seasons, well then you’d probably be right, so if you don’t like it, go make your own list.

Honourable mentions: Hungry Are The Damned, Time And Punishment, The Devil and Homer Simpson, The Genesis Tub, It’s The Grand Pumpkin, Milhouse.

* This order is unchangeable. UNCHANGEABLE!

Homer Simpson, you’re under arrest for the murder of Moe Syzslak and Apu Nasa… Pasa… Uh, Moe. Just Moe. – Part of season 10’s Treehouse line up, Hell Toupée is a riff on… Hell Toupée – a tale that was first on the Amazing Stories series that ran from 1985 -1987. Snake gets the death penalty on Bart’s evidence. After being executed, Snake’s transplanted (and amazing) hair gets donated to Homer which causes Homer to be possessed by Snake, so he can get revenge from beyond the grave. Even when the Simpsons veers away from a Twilight Zone riff, it is still outstanding.

Don’t take out my British charm unit! Without that, I’m nothing but a boorish American clod! – Season 13’s middle story, is a mash up of 2001: A Space Odyssey with a bit of Demon Seed thrown into the mix. When Marge gets a futuristic home security, the security system starts running the house, and it has a thing for Marge. Pierce Brosnan is the voice of the Ultrahouse 3000. Any tale that has unexplained bacon is a winner.

Don’t you worry kids. I have a gut feeling Uter is around here somewhere. Isn’t there a little Uter in all of us? In fact, you might even say we ate Uter, and he’s in our stomachs right now, hahaha. – This season 6 story is notable as one of the more violent stories in the Treehouse series. Nightmare Cafeteria (A play on the very short lived series Nightmare Café) isn’t exactly subtle but it does have that streak of dark humour that The Simpsons can produce. After stumbling onto the fact the children are indeed good eatin’ Skinner and the faculty begin mass consumerism of the students. A parody/riff on Soylent Green and any number of cannibal flicks. Also has a delightfully bloody dance number to finish off in the wrap around segment.

A buck. I’m glad there’s a curse on this place. – Taking place in the first Treehouse of Horror, Bad Dream House takes its cues mostly from The Amityville Horror and Poltergeist. This segment has some excellent one liners, a small scene that gets edited out of every network TV showing and a James Earl Jones voice cameo.

Well, the ape’s going to stand around for 3 hours or so. Then we’ll close with the ethnic comedy of Duggan and Dirschwitz. – The middle story in season 3’s Treehouse of Terror, the condensed King Kong parody, that is funny as fuck. Homer is of course the giant monkey and Mr Burns the Explorer looking to exploit him. Undeniably quotable including one of the all time great Simpsons lines – (I don’t think women and sea men mix, sir) and Shirley Temple getting eaten alive!

Marge, Marge the doll’s trying to kill me and the toasters been laughin’ at me! – Back to back Season 3 treehouse! Homer gives Bart a cursed Krusty doll for his birthday. The doll consistently tries to kill Homer, so it becomes a battle between the Krusty doll and Homer. Taking it’s cues from the Twilight Zone ep Living Doll, Clown Without Pity is a Treehouse of Horror classic.

You can apologise in hell! I guess I could! – Season 21 sees a return to zombies when Krusty Burger launches the Burger squared. ‘We start with grade A beef, feed that to other cows and then kill them and serve the unholy result on a seven grain bun” – the side effect of the burger is becoming a Muncher… Riffing hard on 28 Days Later, Children Of Men and any number of Zombie and Apocalypse films.

4. The Night Of The Dolphin

Intelligent Italians? Something’s wrong – Parodying the 1973 film Day Of The Dolphin (in name only really), this Season 12 treehouse is an all-time great. After freeing a Dolphin from a sea world style organisation (‘Folks, we’re heatin’ up the lobster tank so head on over and pet ’em before you eat ’em’), however the Dolphin that is freed is actually the Dolphin King. Jeff Goldblum voices the Dolphin king, there are a heap of nature amok films that this story apes and it is one of the funniest Treehouse stories ever.

Tell you what, if we come back and they’re all slaughtered, I owe you a coke. – Season 6’s Treehouse is one of the, if not the best of the full Treehouse episodes. It has already made an appearance in this list at number 9 and it pops up here with one of the great parodies The Shinning. Obviously following the broad beats of The Shining, the Simpsons go to Mr Burns’ lodge to be winter caretakers.

You know what would’ve been scarier than nothing? Anything! – Perhaps a centrepiece jewel in the Treehouse crown The Raven is an abridged version of the amazing Edgar Allen Poe poem. Being narrated by James Earl Jones of course gives it more gravitas and the Simpsons twist has plenty of good puns. The great ending being that Homer is scared shitless whilst the Bart and Lisa don’t give it a second thought.

Hello, Simpson. I’m riding the bus today because Mother hid my car keys to punish me for talking to a woman on the phone. She was right to do it. – Here we are at number 1 and it’s a straight rip from the Twilight Zone show & retold in the film story Nightmare At 20,000 Feet. Bart starts to go insane after seeing a gremlin on the side of the bus and no one believes him. Willy and Principal Skinner are also on the bus, Skinner because his mother took his car keys for talking to woman and Willy because his mule wouldn’t walk in the mud so he had to put seventeen bullets in him. A great story because of the expected laughs but also the very dark strand of humour which runs through the whole story.

So there you have it, my 12 favourite Treehouse stories. With The Simpsons seemingly destined to run for the entire span of mankind we can expect more Treehouse of Horror episodes, so hey maybe life ain’t so bad. What’s your favourite?