@lcfremont looks back on AHS: Freakshow Episode 5 – the best episode so far that references Less Than Zero and much, much more!…

The American Horror Story Halloween episode is officially a tradition and this year’s episode was a refreshing entry. While I have found this season to be exceptionally rocky and lacking originality (yes, even with freaks being the main attraction ) this episode was the best so far.

As Edward Mordrake and his haunted house green fog waltz around like Mr. Dark straight out of Something Wicked This Way Comes, we get to learn the stories of our freaks. This was a lazy plot device and took any menace away from Mr. Mordrake, but it was wonderful to have our beloved freaks presented as human beings. My heart broke for our handsome seal boy. He is 100% correct; he has a handsome face and he could have ruled the world.

Exhibiting my ignorance at the notion that Elsa is, indeed, a freak due to her double amputation, I was perplexed when Mordrake began harassing her after their battle of the accents. (Wes Bentley has had the least offensive accent on the show and his is on par with Famke Jansen’s from the first season of Hemlock Grove. Now, that is saying something.) As expected, Elsa Mars’ twisted backstory did not disappoint. Dressed in some fierce dominatrix gear and a truly awful wig, Elsa was the queen bee of sex work during Hitler’s reign. She was so good, that she made men ejaculate gold. Ouch and can you collect enough to make jewelry? 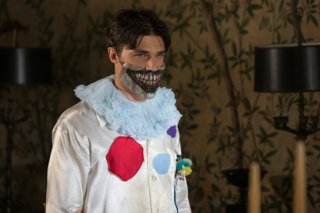 Let’s move on to the incident that made Elsa a “freak”. Now, if you have spent too much time with your nose in a book, perhaps you have enjoyed the writings of Bret Easton Ellis. If you have, then the whole Elsa is in a snuff film with chainsaws probably felt familiar. That’s because this same gruesome tidbit existed in Ellis’ Less Than Zero. I bring this up because almost anything that seems crazy, over the top or truly scary on this show can almost always be traced back to a previous film or book. As of now, you can just throw Halloween, The Elephant Man, It, Freaks, Zodiac, Something Wicked This Way Comes, Moulin Rouge…. I could go on… into a blender and you would get this season of American Horror Story. Between this and the deluge of horror remakes and reboots, it really is starting to look as if there are no more original ideas. So, too bad Elsa starred in a snuff film, but at least she was a star in something since that seems to be her only motivation in life. Just when it looked as though we were going to lose Ms. Mars, which would have been a truly bold move, she is saved by the sound of Twisty banging on a piano.

Finally! Twisty and his reason for being. No shocker here that it was a real tear jerker of a story for Mr. Twisty. Literally dropped on his head as a baby because his mother had too many cocktails, Twisty is a gentle man who loved to make children happy. Well, apparently, dwarves are power hungry and they were not interested in Twisty taking the spotlight off of them. A series of unfortunate events leads him to take his own life, but he does not succeed and that is why he is missing the lower part of his jaw. The sight of his missing jaw and that creepy tongue poking in and out was great and an interesting visual juxtaposition to the sweet man that lives behind it.

A genuinely heartbreaking story, Mordrake is similarly affected by Twisty’s tale of woe and takes him back with him to …….. where? Where does Mordrake live with his band of freaks and why does everyone fear it? It looks to me that being with Mordrake and the other freaks is much more enjoyable than being treated as less than human on this mortal plane.

Speaking of being treated like a human, Jimmy Darling finally got his wish. After being heralded as a hero for killing Twisty, the townspeople came in droves to thank him, shake his hand even, and now we can all live happily ever after, right? Of course not silly head, Jimmy is still peeved about Meep. Sorry kids, but Meep was a geek and I don’t feel pity for people who bite the heads off of animals. I have to give HUGE kudos to Murphy and team for being clever enough to cover Meep’s disgusting, pointy, animal killing teeth when he was screaming for his life; this proved exceptionally effective in helping people side with Jimmy Darling on this one.

Now that Edward Mordrake has managed to push a restart button on our show by explaining a few things, removing who was poised to be the Big Bad, thus, reinstating a new one, perhaps things will go a bit smoother from here on out. An even bigger question is this; will we all be able to make it through an entire season of Dandy being the Big Bad? He is so terribly annoying and dude killed Patti LaBelle before she could do a musical number. Here’s hoping he is disposed of quickly as well. With the announcement of Lilly Rabe coming back as the nun, presumably to leave with Pepper, and the addition of Neil Patrick Harris for a couple episodes and Denis O’Hare returning to the fold full time, maybe one of them will prove to be a baddie as well. At this point in the show, I really don’t think it is out of the realm of plausibility to hope for Mr. Harris to do a Hedwig number while visiting; a girl can dream.