Inspired by Dior and Lagerfeld, Will Drake is remodeling the Cortez in an effort to have a place for him to be constantly inspired. This leads to the discovery of a hallway that has been sealed for decades and it holds some serious secrets.

Flashback to Hollywood 1925 and the Countess, Elizabeth Johnson, is just another extra on a Rudolph Valentino film set. (Yes, that is Mr. Whitrock playing Valentino and, no, you weren’t the only one who didn’t realize that straight away.) Valentino and his wife, Natasha, seduce Elizabeth into a love triangle and the news of Valentino’s death drives her to thoughts of suicide. Saved by Mr. March, Elizabeth mourns her true love while becoming the true love of March. Unfortunately for March, Rudolph and Natasha aren’t just alive, but they’re vampires and they have come to share their virus with Elizabeth. They don’t care that March and Elizabeth are now married and in an unusual type of relationship because F.W. Murnau has made them immortal and they want Elizabeth to join them. Much like the Countess, March doesn’t share, so he seals Rudolph and Natasha behind steel and bricks. If she hadn’t killed Tristan last week, I might have felt bad for the Countess when she found out that her one true love had been in the hotel with her this whole time. 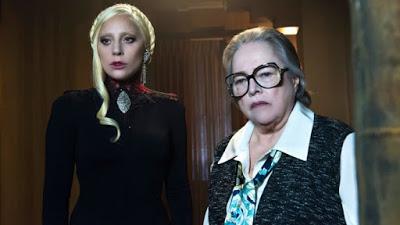 John Logan has had a stroke of genius and decides to check himself into the same hospital that he believes the Ten Commandments Killer is being held. After failing a counting test that most people wouldn’t pass, he then moves on to an office that is straight up out of Se7en. Are we entirely sure this isn’t the same set of the lawyer who had to choose which pound of flesh to cut off of himself, because the painting on the wall and the tchotchke’s on the desk seem to suggest it is.

John manages to get into the ward where Detective Hahn placed the killer only to find a young vampire in room 153. Ren claims that she has been helping the Ten Commandments killer and that she no longer wants to feed. The conversation that takes place between John and Ren smacks of a Sybil type revelation. Does John suffer from multiple personality disorder, is there an evil twin hidden away or has John really been Edward Mordrake in disguise this whole time?

Directed by Michael Goi, this episode was a feast for the eyes. So many beautiful and unique camera angles, gorgeous lighting and a great moment of old time movie aesthetics. As the revelation of the Ten Commandments Killer grows closer, do you think you know who it is? Let me know on Twitter.

The nod to Nosferatu was well done and a delightful surprise.

There are two more vampires on the loose in L.A. What is our total now with all of those kids from the school?

“How would someone even know their anus needs bleaching? I couldn’t pick my butthole out of a lineup.” Well said, Iris.

Bye, Marcy. I guess the Murder House has officially been put to rest.

What is it with Murphy and hobo’s? The derogatory term has been used on both AHS and Scream Queens.