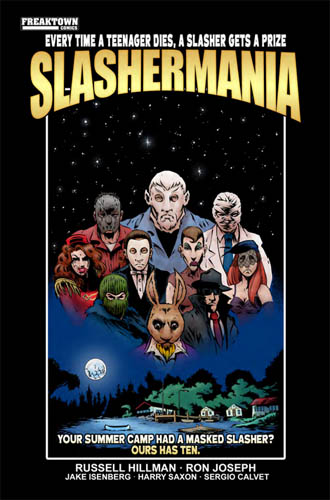 Check out all the details for Slashermania below & go visit their kickstarter here – https://www.kickstarter.com/projects/1692478274/slashermania-epic-retro-eighties-horror-graphic-no

1983. Troubled teens from New York and Los Angeles are taken to a summer camp facility to be trained as counsellors and mix safely with other people their own age. Little do they know they are being watched by an audience hungry for sex & violence. They are the designated victims for a bizarre contest of murder and mayhem –
WELCOME TO SLASHERMANIA!

Slashermania is an original graphic novel in the tradition of films such as Scream, Behind the Mask: The Rise of Leslie Vernon, The Final Girls and Cabin in the Woods. Functioning both as a tribute to, and an examination of, the eighties slasher movie phenomenon, it’s mostly played straight but with an undercurrent of post-modern self-awareness and some appropriately inappropriate laughs along the way – carefully designed not to undercut the scares.

It should appeal to readers of titles such as Tim Seeley’s Hack/Slash, Williamson/Henderson’s Nailbiter and Alex de Campi’s Grindhouse miniseries.

The Kickstarter campaign runs from 13th August – 13th September. In the meantime, you can follow Freaktown Comics on Twitter for a daily art tease and a slasher-themed poll
Watch the trailer https://www.youtube.com/watch?v=JQYSoKAqbj8 and listen to the soundtrack playlist https://www.youtube.com/playlist?list=PLijemJLZk8wL2IT3g-uGQRwdkREAZEDwq on YouTube.