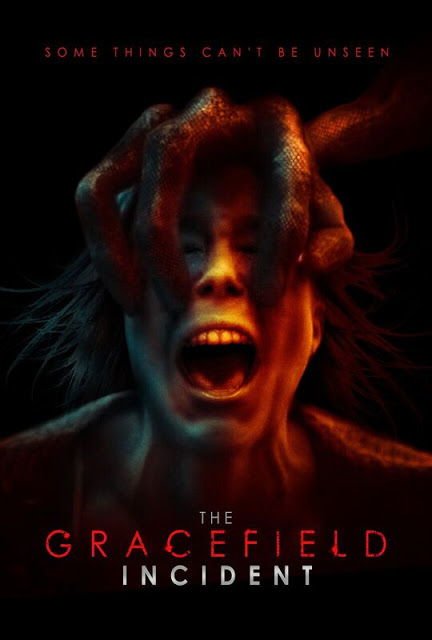 Mathieu Ratthe – Writer, Director, and star of Sci-Fi Horror flick The Gracefield Incident – recently spoke to me about his exciting new picture, which packs a surprisingly emotional punch. The charming and bubbly Ratthe spoke candidly about how the budget of The Gracefield Incident led to creative challenges that, somewhat serendipitously, led to one of the more unique premises I have seen within the first-person genre.

This interview has been edited for clarity.

ED: I have noted here that your film has three setups: 1) An opening scene with a horrific car accident where you not only lose your eye, your pregnant wife loses your child. 2) Cut to 8 months, and you see yourself implanting what appears to be a glass eye, but fitted with a tiny camera in its pupil. 3) Finally, you have the familiar plot device with a group of friends getting away for the weekend to stay in a cabin in the woods, where the plot and terror begins to unfold. I have to ask, starting with the opening scene. Are you a father?

ED: Well, I wrongly assumed, but the scene – losing a child – is very effective and turns out to be a major plot point. What was the inspiration behind this?

MR: Parent or not, I think losing a child is a universal feeling of loss. Almost anyone can understand it even if they have never experienced it. I have 4 nephews, and I couldn’t imagine losing them. I sometimes feel I was born to be a dad and hope to be some day. Plus, I have always related to kids. I have a very close family, so having this scene is a way for me and the audience to have an emotional experience.

ED: Let’s talk about “the eye.” Directors of first-person films are starting to get very creative with all kinds of cameras to capture a slew of perspectives. You see drones, GoPros, even a knock-off of the now defunct Google Glass is used in last year’s JeruZalem. It certainly brings a freshness to the genre. How did you come up with a camera in the eye, which I am surprised hasn’t been used like this before?

MR: Well, believe it or not, the eye was not originally part of the film. I had a very limited budget and time constraints, meaning I only had 13 days to shoot this movie. Originally, I wanted to have multiple cameras with unique angles, but the time and money was just not there. And because I am also starring in the movie, I realized that I would have to put a camera on my shoulder to simulate the effect of having a camera in first person. So, these constraints actually led to the idea of putting the camera in the eyeball.

Sometimes those types of constraints can lead to surprising bouts of creativity.

Indeed, they can! (Laughter)

ED:The final setup, if you will, is familiar. Like I said, it’s a weekend retreat with your wife and friends, the idea being that you’ve been mourning for months, and it’s time to move on with life. But within hours of your trip, a meteor crashes nearby. This shock to the characters is soon met with a mysterious antagonist in the woods, who we can only infer, dropped from outer space as well. So why the Sci-Fi twist?

MR: I think people are tired of the same story. Yes, I made this movie to scare and to frighten. But you don’t see this antagonist for most of the movie. You don’t see any blood or gory deaths. There is mystery, suspense, and certainly scares, but what I wanted was to have my protagonist – me – have something in common with the antagonist.

I do realize that I am using certain clichés, as you see in this genre. But I wanted to play with those clichés and not simply outdo the last movie with more of the same.

ED: Without giving too much away about the ending, once we learn about this mysterious antagonist, I see the film coming full circle. Perhaps that was your intention? What I see is an over-arching theme or even a lesson for viewers. Can you speak to that intention? Or offer any takeaways once the credits roll?

MR: What you see is not really what you see. What you see is not always bad. We don’t know why the characters surrounding the protagonist are experiencing terror from the antagonist, but once the mystery is revealed, I – the good guy – would have done the same thing. Think deeper, and do not assume is one lesson. We don’t always understand the motivations of people we don’t know, and that can lead to more fear than is necessary.

Exactly. We fear what we don’t know, but maybe we just need to stop assuming and listen.

The Gracefield Incident is in select theaters and On Demand / Digital HD on  July 21, 2017.