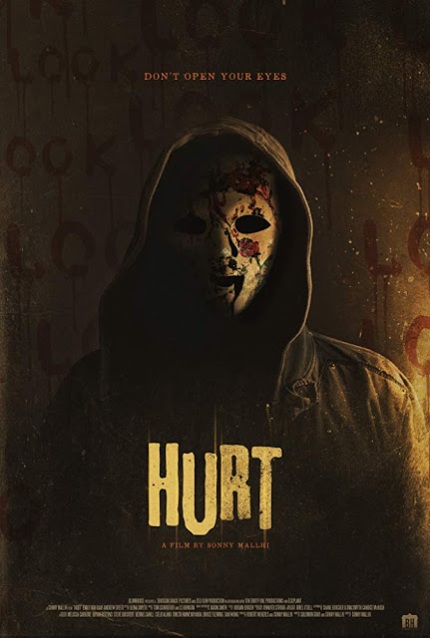 Sonny Mallhi has been building up an impressive resume in the horror community, his third feature film, premiering at the 2018 Fantasia Fest Film Festival, is a layered look at horror, both real and fake and how we consume it or let it consume us.

Hurt stars Emily Van Raay in a knockout first time performance as Rose, a young wife whose husband has recently returned home from his first military deployment. Rose is introduced to us by taking an eerie amount of joy in freaking out the children who come to her door trick or treating. With her uncanny valley mask and detailed story involving a facial scar and knife-wielding father, she clearly relishes the Halloween season and the free license it gives to scare and be scared. Later, while hanging out with her husband Tommy, it is abundantly clear that Tommy is not in a great mental state; simply going through the motions of behaving normally with his wife and her family is an exercise in torture for him.

In an effort to relive happier times, Rose and Tommy decide to visit the yearly Hayride Park. In what must be one of the most kick ass small town Halloween celebrations; we learn that Rose did not always enjoy the scarier side of life. It was Tommy who helped her gain an appreciation of horror, and she seems to be having a great time on the hayride, in the haunted house, at the stage production of a local urban legend turned movie and at a faux public hanging. Meanwhile, Tommy is trying his best to stay chipper, but tellingly, cannot even bring himself to look at the woman being hanged. After a fight, the two are separated and what ensues from here is a study in the visceral nature of a well-done slow burn horror film.

Slow burn is a term that immediately turns some viewers off and I totally get that. On first viewing of Hurt, it felt unnecessarily drawn out with an overabundance of voyeuristic shots and an inflated sense of ego with its message. However, a second viewing showcased just how subtly Mallhi placed story elements throughout and crafted an atmosphere of apprehension that turns to full on fright in the final twenty minutes of the film. Beginning with a movie within the movie, Hurt has a lot to say about horror and using it as a form of entertainment. While it can be a little annoying to feel indicted by the very medium that I am consuming, Mallhi does pose some interesting questions. Why is it always a Final Girl? Are men expected to be so masculine and immune to fear that a Final Boy would never be as scary? A masked killer with no obvious motive is fine, but a killer that is fueled by real world horror and death is somehow trickier for us to reconcile.

At times, Hurt believes its point is much headier and profound than it actually is, but it’s an undeniably interesting quandary nonetheless. There are many pieces that come together to make the whole and, at times, it’s simply too much. For some, the pace and the cinematography will make them crazy and it will not matter how clever the story may or may not be. Overall, Hurt is a smart look at the masks that we all wear as we navigate through the nightmare that is life.

Played as part of the Fantasia Film Festival