With its ambiguous opening scene and punk rock credits, The Ranger immediately lets you know that you’re in for a wild ride. Starring Chloe Levine (The Transfiguration), Jenn Wexler’s feature directorial debut is a neon soaked journey through poor decisions, bad attitudes and dark secrets. 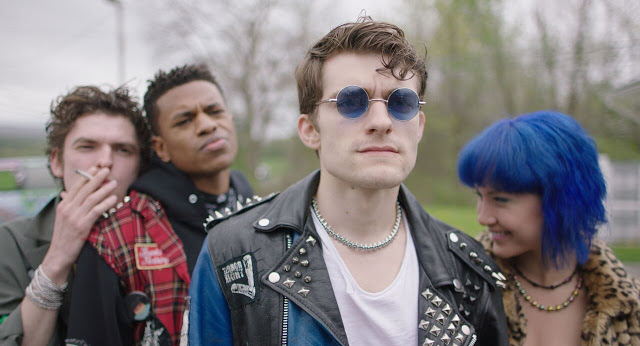 At a punk rock show, it is quickly established that Chelsea (Levine) does not entirely share the same Fuck You attitude of her boyfriend and friends. You can practically feel her judgement of them as they indulge in drugs for fun and anarchy while she does it in an effort to escape long held memories. After the first bad decision that this group of derelicts will make, Chelsea and her friends decide to lay low at her family’s cabin in the woods: because this is a horror movie, a cabin in the woods means that absolutely nothing good will come of this decision. 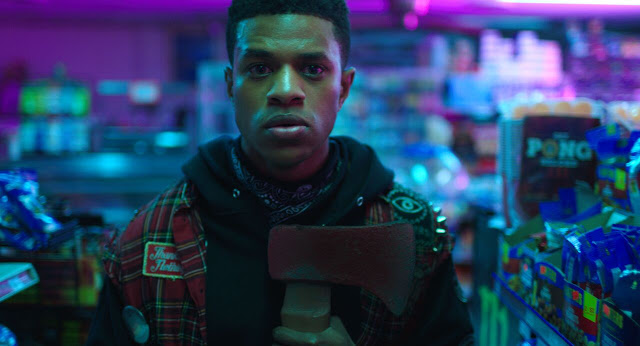 While at a convenience store to pick up food and supplies, Chelsea and her friends run into the park ranger: the very same ranger that we met in the beginning of the film. Played by Jeremy Holm (House of Cards) this park ranger takes his job very, very seriously and he immediately pegs this group of punks as a future problem. Garth (Granit Lahu) seems to be the main spokesperson for every one and he is also the reason they’re on the run. Rather than be respectful to the ranger, he is a real shit and this goads the others into behaving like assholes as well. Except Chelsea. Chelsea knows exactly who she’s dealing with.

As expected, nothing goes as planned at the cabin in the woods and, quite frankly, it’s really satisfying to see the ranger start doling out his brand of law enforcement on these kids. Perhaps my age is showing, but these punk rockers really are a bunch of punks and they’re so obnoxious. It’s almost impossible to believe that Chelsea is actually friends with them because they are so disrespectful to her as well and it’s clear that she’s cut from a different cloth.

Levine was transcendent in The Transfiguration and The Ranger further cements her ability to play characters that appear fragile on the surface, but are actually anything but. Holm’s performance is delightfully nutty and one can’t help but wonder if he should have been allowed to be even wackier. Self described as soft horror, The Ranger still manages to throw in some fun moments of blood and gore and that’s exactly what this movie is: fun. Wexler has crafted a midnight movie with punk rock music, a tongue in cheek tone and a kickass final girl all wrapped up in a pretty neon package.

The Ranger has theatrical runs at New York’s IFC Center August 17th – 24th, and then in L.A.’s Laemmle Theatre September 7th – 14th. The film also has a UK Premiere at Frightfest on the 23rd August.