Jennifer Lynch came right out of the gate with beauty and gore colliding in a crazy voodoo ritual opening. Lynch appears to have become one of the regular directors on AHS and I’m here for it. Now we know for certain that Dinah is the new Queen of Voodoo, but she is only motivated by money and that’s why she agrees to set up a meeting between Cordelia and Papa Legba.

Ultimately, the meeting is fruitless because Cordelia refuses to sacrifice all of of her girls in exchange for trapping Michael in hell. We do get to see Nan and get the answer to, “Where has she been?” Her delight in mucking about in hell with Papa Legba was good fun. So, will we see Papa again or were they just throwing us a bone with this scene that went absolutely nowhere? 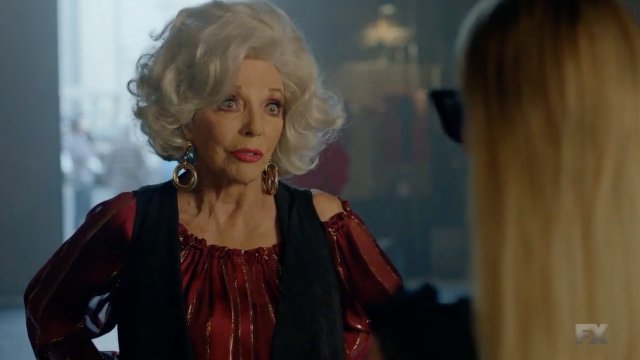 In what feels like a second cold opening, we get A Christmas to Dismember. Would I love to see a movie titled A Christmas to Dismember? Absolutely. If I didn’t already have a love of the And All Through The House segment from the 1972 anthology film Tales From the Crypt starring, wait for it…Joan Collins, I would have enjoyed this bit, but it just felt really, really lazy. And All Through the House was remade for the 90’s show Tales From The Crypt, so we are now looking at a third iteration of it. If they wanted to throw in a shout out to a crazy Santa a’la Ian McShane’s character in Asylum, then DO THAT. Aside from hoping Bubbles McGee was going to throw a tantrum over wanting Cha Cha Heels (Long Live Dawn Davenport) instead of those flats, this fell, well, flat and, no, I don’t care that they brought Madison in to make a snarky comment about how this movie was already made. I do love how Bubbles refused to look at the script declaring that she got the lines right, though.

Bubbles’ gift of reading people’s minds comes in handy because then no one has to waste precious time explaining everything to her. After all, we only have three episodes left after this one. She will put this talent to use at a dinner with Ariel and Baldwin where they learn of John Henry’s death and the level of hatred that these fragile men hold towards the women. The John Henry bit is especially helpful because we all know what fate awaits a witch who kills one of their own.

Coco has a new power: deciphering the exact calorie count for any given food. Oof. Coco still manages to be unbearable and can’t even eat a Snowball correctly. After choking to death in less than 10 seconds, Mallory does some seriously cool witchcraft and brings Coco back to life. These girls standing around watching someone choke because they don’t know a spell to fix it feels like a commentary on the perceived laziness of the millennial generation. Zoe points out that she has never even heard of a spell like what Mallory does and it’s just becoming more and more obvious that Mallory is not only the next Supreme, but she’s also going to be the one to battle Michael.

During The Last Supper of the Coven, we finally learn how Myrtle came back. It’s a cool scene, but why didn’t it come up earlier? The timing felt misplaced. Whatevs. We are then treated to a Reservoir Dogs strut to the gas station where John Henry was turned to ash and Mallory gets to complete her final test of the Seven Wonders. 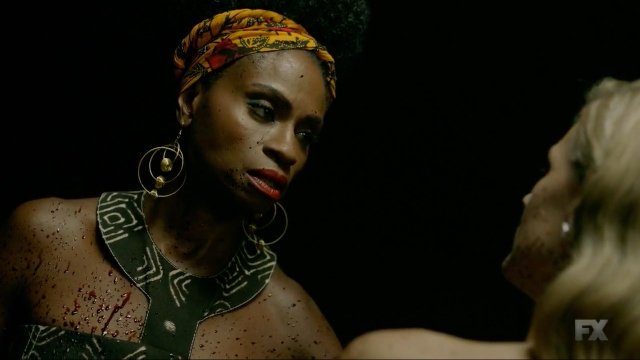 Back to toxic masculinity: Baldwin has invented a powder that kills only women. Bitch, no he didn’t! Agnes Sampson originally created this powder in 1590 with it’s intent to kill men. (Fun fact: Sampson was a real life witch who was burned at the stake. Something else happened in 1590; the disappearance of the Roanoke colony.) These men are so pathetic in their desperate need to supersede women. If we didn’t see this kind of behavior Every Single Day in real life, it would be more shocking, but it’s definitely a ton of fun to see Ariel and Baldwin’s faces when John Henry swaggers in with some gasoline and a sassafras attitude. Unsurprisingly, Ms. Mead is not at all concerned about being murdered. She even starts talking to her personal lord and makes a convincingly spooky looking face while the flames consume her.

Another episode in the Apocalypse books and it is STILL taking place in the past. I’m no Nancy Drew, but it looks as though next week will take place, at least partially, in what must be the longest flashback sequence in television history and then episode nine (titled Fire and Reign) will deal with the actual showdown between Michael and…my bet is on Mallory with Cordelia possibly sacrificing herself in some way because bitch loves to be a martyr. The final episode is titled Apocalypse Then and it definitely feeds into the many fan theories that the apocalypse will be reversed through some sort of time reversal spell or whatnot.

Once again, it was nice to see familiar faces, but this episode left me feeling duped into watching a storyline that has been sitting around on the writers’ desks for years. I know everyone is very happy to be seeing the ladies of Coven, but ask yourself this: pretend this entire season is characters you’ve never met before. Are you still enjoying it or are you staring to feel like you did when you were watching Roanoke? And speaking of questions, I’ve got a few:

-Is Mallory more than “just” a witch? Michael is, after all, not a warlock, but the child of a mortal and a spirit. What if Mallory is the child of a mortal and an angel? All of the biblical and apocalyptic stuff would make a bit more sense. Zoe keeps saying how Mallory is special and in the flashbacks within the flashbacks, we see that her powers are definitely beyond that of magic or voodoo.

-If Michael was under the presumption that he had destroyed all of the witches, then how could Cordelia, Myrtle and Madison possibly be the ones to destroy him? The first time we saw these three ladies was on the Halloween episode and according to Murder House lore, Halloween is the one night that spirits are able to roam free. Are they all dead?

-If Cordelia is dead, was she able to suss out Mallory’s angelic importance before her death? It would then make sense that she would put her under a spell and make her believe that her largest purpose in life is to serve Coco. (More on her later.) We should also pay attention to the fact that Mallory has the ability to manipulate fire while Michael has shown his ability to manipulate the element of water. Myrtle did say that she always envisioned the world would end with fire and ice, not witches and warlocks. Myrtle says a lot of shady stuff, but sometimes it’s of great importance.

-Why did Michael make a robot version of Ms. Mead if he can just retrieve anyone he wants from any realm? Is this like the alien storyline in Asylum where it was just kind of left by the wayside when they realized there was already way too much going on?

-Why doesn’t Dinah want anything to do with the witches or Michael? Can the Voodoo Queen really just exist in her own, little magical universe?

-What is Coco’s purpose?! For the love of Denis O’Hare, why are we still being subjected to her vacuous character? Unless Michael ultimately succumbs to a rare allergy to overdoing it on carbs on his cheat day, Coco’s brand of “humor” lost it’s appeal a long time ago and this is especially grating because Leslie Grossman is a treasure.

-Does hair and makeup hate Evan Peters because between his Tate Langdon wig and the one they have him in for episode 8, it’s looks like Peters pissed off the wrong crowd.

-Bubbles McGee? Did they throw darts to decide her name? Are Bubbles and Nana the same person or no?

-Michael is in the wilderness? Doing what? Making more bone mobiles?

-Where the hell is this gas station? Is it in California? Is it in Louisiana? How does everyone get there so quickly?

-Why did they use Coco as bait for Ms. Mead? It was another scene that felt completely useless and unnecessary.

-Why was Ms. Mead looking up when she started talking to her holy father? I thought hell was downstairs.