Now that we’ve had our first course, it’s time for a very special dinner guest to arrive. I think we can all agree that we knew Hannibal injured Will in a precise manner, intending for him to survive. Or, at least, leaving a really large possibility for him to survive. After reliving the beautifully tortuous face-off between Will and Hannibal at last season’s finale, we are introduced to a recovered Will Graham and he has just received a most wonderful dinner invite. 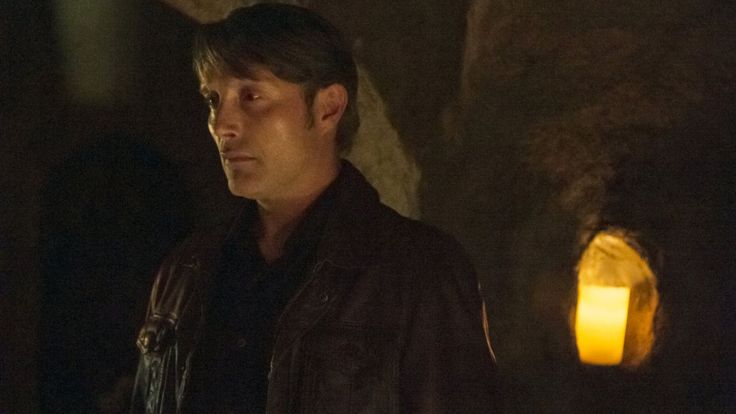 Reintroducing Will made for an episode heavy on the Memory Palace. A lot of flashbacks, dream sequences and talking to people who may or may not be dead meant that we got to feast on some truly visually stunning scenes. Seriously, every time you think that this show can’t be more gorgeous, they prove you wrong. I suppose that is Bryan Fuller’s design. I fully approve.
Meeting up with Inspector Pazzi was fun because (a. you get to see a young headshot of Mads and (b. so far the show has done really well at placing characters from the books into the show seamlessly despite them all being out of chronological order. Both Inspector Pazzi and Mason Verger did not show up until the third book, Hannibal, but here they are existing in the same time line as Frances Dolarhyde who is the focus of Red Dragon, the first book in the series.

Some women lament the fact that they never receive flowers from their beloved. Imagine if they received a human topiary. A literal valentine written on a literal broken man. When that topiary started unfolding and animated into a heinous, yet beautiful, stag of sorts, it was equal parts revolting and magnetic. I must admit to becoming a wee bit leery of the amount of visual grandstanding going on. Hey, I love to see blood pooling and gushing and made to look impossibly romantic, but I also like to just get some storyline going. Here’s hoping that after they catch us up on Jack Crawford and Alana Bloom, we can get this show on the road and be treated to episodes that are equally balanced with beauty and forward movement of the story.

The cat and mouse game in the catacombs was really lovely and creepy, but it also smelled a little too much like a tragic love story. I’m really happy that Will forgives Hannibal for the sins that he has committed, but I will not be as generous if the show keeps favoring looks over intellect. TV Babies, I know that most of you were head over heels in love with this episode, but didn’t it feel as though a bit more progress could have been made?

Sidenotes:
Where can I get that black and white picture of young Mads? I need one framed and on my bedside table.
It’s a testament to the writers that Hannibal is so engaging despite the fact that the most popular and well known Hannibal Lecter story is off limits to them due to legal issues. Who needs Clarice Starling when you’ve got Bedelia?
Remember when Twin Peaks lost it’s way and was just really cool looking and quirky, but not so good at the plot? I’m really hoping that is not what is happening with Hannibal.

2020 Notes:
Now that the show has found a new audience via Netflix, it appears that the third season is still a mixed bag as far as viewer reception. Admittedly, from a bingeing perspective, it’s such a left turn from season two to season three, that it feels like a different show. Allegedly, Fuller had a seven season plan for Hannibal which would make me wonder why they used elements from the fourth book of the series in season three: it’s this addition that makes it feel overstuffed on top of already being so visually opulent.