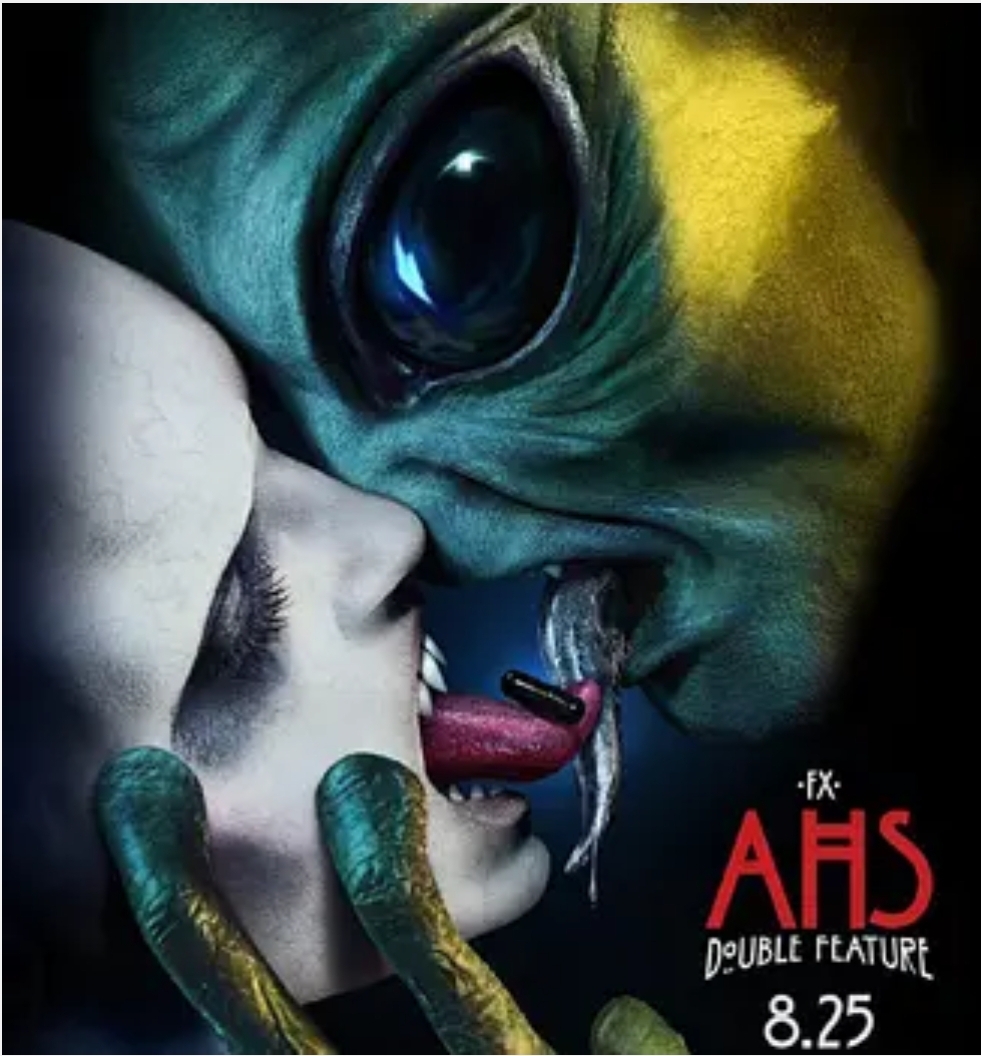 A cool, muted color palette, an abnormally attractive family driving and their daughter is counting roadkill. Welcome to the new season of American Horror Story. The little girl has counted nine dead animals so far and remarks how it’s weird that it’s more sad when a cat gets run over than when a raccoon does. (Speak for yourself, sister.) The tenth roadkill is a deer right in the middle of the road and it’s very clear that this poor animal was not hit by a car, but rather something was eating it’s throat. As the husband inspects the animal, his wife warns him not to touch it because he could get Lyme. Cue the opening credits which feature, meat, meth, music and blood.

Harry Gardner (Finn Wittrock), Doris Gardner (Lily Rabe) and their daughter Alma (Ryan Kiera Armstrong) have just arrived in Provincetown, Massachusetts. (P-Town if you’re nasty.) Harry is a screenwriter hoping to write a pilot and Doris has been given permission by the owners of the home they are renting to do any redecorating she would like. Pregnant with their second child, the former school teacher is hoping to begin a career in home design.

Alma remarks that the house looks haunted and her dad tells her that every house in Provincetown is haunted, which isn’t hard to believe. Martha, the woman who looks after the house, explains that the winter population dwindles down to about three thousand, which certainly makes the town seem haunted compared to the sixty thousand that are there in the spring/summer months. When Martha finds out that Doris has been given permission to redecorate, she looks legitimately concerned. She is kind enough to tell them to keep their booze stocked, don’t swim near the seals and don’t imitate the accent. Martha is the perfect welcome wagon: friendly, but a wee bit wacky.

As Harry walks through town to go to the market, the sky grows dark and porch lights begin to turn on, but they are red. Not all of them: just some of them. At the market, he runs into Tuberculosis Karen (Sara Paulson) who yells at him to get out of the town because, “They will munch on your balls.” Don’t know who ‘they’ are, but I’m sure it has something to do with the red lights.

Alma plays her violin while Harry and Doris try to get inspiration for their respective jobs. Alma is some sort of prodigy, but her dad still complains that her music is distracting him. Ever the perfect wife, Doris takes Alma out on a walk where they encounter a very strange man in the local cemetery. He looks like what would happen if Nosferatu shopped at Hot Topic. He chases the two girls to their home and no one is around because…winter months. Enter Chief Burleson (Adina Porter) as a former Oakland Police officer who now works in P-Town because it’s boring. She either has absolutely no idea what is going on in town and does not care or she knows everything and works with whatever nefarious element lives here. When Harry brings up the case of a family of five who were murdered nearby, their throats ripped out, Chief Burleson writes it off as a mob hit. I’m going to assume that she is complicit in whatever shenanigans are going on.

Alma is woken up by pebbles being thrown at her window and Nosferatu is back with two friends. They hiss at her and run away. Are they after her because she’s young, because she’s smart or both?

Harry has writers block, so he starts drinking because what fun is AHS without a horror trope?

A morning run on the beach and Harry finds two dead bodies. Instead of going home and telling his wife, he asks her out on a date. (I’m sure this decision won’t come back to bite him on the ass.) Unfortunately, Doris is hit by some nausea and she has to stay home, but urges Harry to go to the restaurant without her and enjoy some time alone and, hopefully, get inspired. She does, however, request that he bring back a steak or a hamburger because she’s craving red meat. Her obsession with Lyme disease, her nausea and her craving for meat are all obviously part of whatever is being set up. It feels a little bit obvious, but also very promising.

At the restaurant, Harry meets Mickey (Macauley Culkin) who is a male escort with an obvious drug problem and a wicked sense of humor.

The piano player begins playing Islands in the Stream and just when you think you can’t be giddier about it, you see Evan Peters and Frances McDormand singing karaoke to it. This duet is just so supremely campy in the most amazing way. Later, they send a drink over to Harry and this is what prompts him to join them and learn that they are both writers. Austin Sommers (Peters) has won multiple Tonys and a Peabody and Belle Noir (McDormand) is a bestselling romance novelist. They both winter in P-Town because they find it inspiring. When Austin says, “Don’t you just love an Aperol Sprizer in the wintertime? It’s breaking all the rules and I’m here for that,” and then makes a Les Miserable joke, I feel like we learn a lot about him and I’m here for whatever that is.

When Harry arrives home, he is greeted by one of the Nosferatu looking guys and has to fight him off. Again, when Chief Burleson shows up, she is nonplussed by the situation. She says the guy is just a tweaker. Harry decides they should leave in the morning and in an unusual twist, it’s the wife who thinks of her career first over the safety of her family.

Belle has Mickey over as a client and offers him an extra $200 if he will let her feed off of him. He says no because last time she went crazy and she blames it on the meth he took. Anyway, she takes out her human teeth, bares her sharp teeth and pulls a razor blade out of her necklace. Very Catherine Denuve in The Hunger. Very cool. She then phones Tuberculosis Karen and commands her to do something heinous.

Belle comments that she sold her soul for greatness. How does this play into what is going on with bloodsucking meth users? Well, one thing is for sure: Belle just ate a baby and then her red porch light was turned off.

If the Gardner family actually left, we wouldn’t have a season 10 of AHS, so Austin calls Harry and invites him over, says he has something that will cure his writer’s block. Austin lives in a truly gorgeous home that he knocks about in while wearing absurdly expensive silk pajamas. He offers a black pill to Harry. He tells him that he doesn’t know what’s in it, but it guarantees to cure the writer’s block. Now, I don’t know if this is an Alice in Wonderland or Matrix type of pill, but Harry will take it because he gets a call from his agent Ursula (Leslie Grossman) who gives him information that scares him into it.

So, this picture perfect family is living in a creepy house in a deserted town that is run by bloodsuckers and artist types who take mysterious black pills. Everything looks, feels and sounds bleak, just the way we like it in our AHS. For the first time in a few seasons, I feel very optimistic about what they have in store for us.